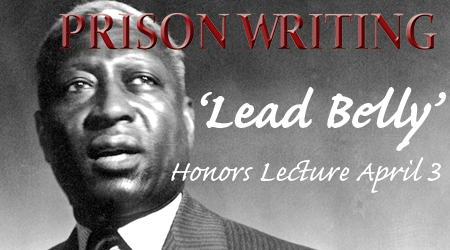 Huddie "Lead Belly" Ledbetter is shown with his accordion in this circa 1942 photo from the Alan Lomax Collection in the American Folklife Center of the Library of Congress.

The 4:30 p.m. lecture, “’The Jail House Is Full of Blues’: Lead Belly’s Prison Pleas,” will be held in Room 106 of the Paul W. Martin Senior Honors Building on campus. It’s part of the Spring 2012 Honors Lecture Series at MTSU, which is focused on “Prison Writing.”

Ledbetter was a Louisiana native who gained national fame in the 1940s after decades of performing folk and blues music across the South. Imprisoned twice, “Lead Belly” used his jail time to learn and write more songs, even using music to gain a pardon from a Texas governor.

Folklorists Alan and John Lomax discovered Ledbetter in the Angola Prison Farm while recording prison songs for the Library of Congress and brought him and his music to the rest of the world.

“Lead Belly” was best known for his work on the 12-string guitar, although he played multiple instruments, including the accordion, mandolin and piano. He brought folk ballads like “Goodnight Irene,” “Midnight Special,” “The House of the Rising Sun” and “The Rock Island Line” into the mainstream and wrote his own gospel, blues, folk, political and topical songs.

The lecture is free and open to the public. For more information about the MTSU Honors Lecture Series, visit www.mtsu.edu/honors or call 615-898-2152.