In celebration of Black History Month, MTSU has bestowed one of its top faculty honors on a professor described as a “Renaissance woman.”

Leah Tolbert Lyons received the John Pleas Faculty Recognition Award Thursday, Feb. 13, in a ceremony at the Sam H. Ingram Building on the MTSU campus. The plaque is presented annually to a black faculty member who has demonstrated excellence in teaching, research and service.

The academic for whom the award is named, Professor Emeritus of Psychology John Pleas, referred to Lyons as a “Renaissance woman” in his address, praising the selection committee members’ choice of Lyons.

Leah Tolbert Lyons, center, an associate professor of French and interim associate dean of the College of Liberal Arts, accepts the 2020 John Pleas Faculty Award at a Feb. 13 ceremony in the Sam H. Ingram Building. At left is John Pleas, professor emeritus of psychology, for whom the award is named. At right is MTSU President Sidney A. McPhee. (MTSU photo by James Cessna)

In accepting the award, Lyons, an associate professor of French and interim associate dean of the College of Liberal Arts, thanked her parents, husband, children, colleagues and administrators, acknowledging that she could not have accomplished her goals alone.

“Wherever we’re going, we don’t get there alone, but maybe by helping one another, we can get there, where we’re going, together,” Lyons said.

“My desire is to help others along their way to get where they are going — students, colleagues, whoever it is, whatever I can, wherever I can.”

Lyons, an MTSU alumna, has taught French language, literature and film at the undergraduate and graduate levels since joining the faculty in 2001. In addition, Lyons has taught contemporary African literature as part of the Africana studies program and the film studies minor.

Her research interests include Francophone literature, film from Africa and its diaspora, women writers and gender theory. She has shared her expertise at conferences in the United States and abroad.

“She is important as an undergraduate student who went on to become an awardee,” said MTSU President Sidney A. McPhee. “Recognizing her accomplishments in teaching, service and research is absolutely awesome.” 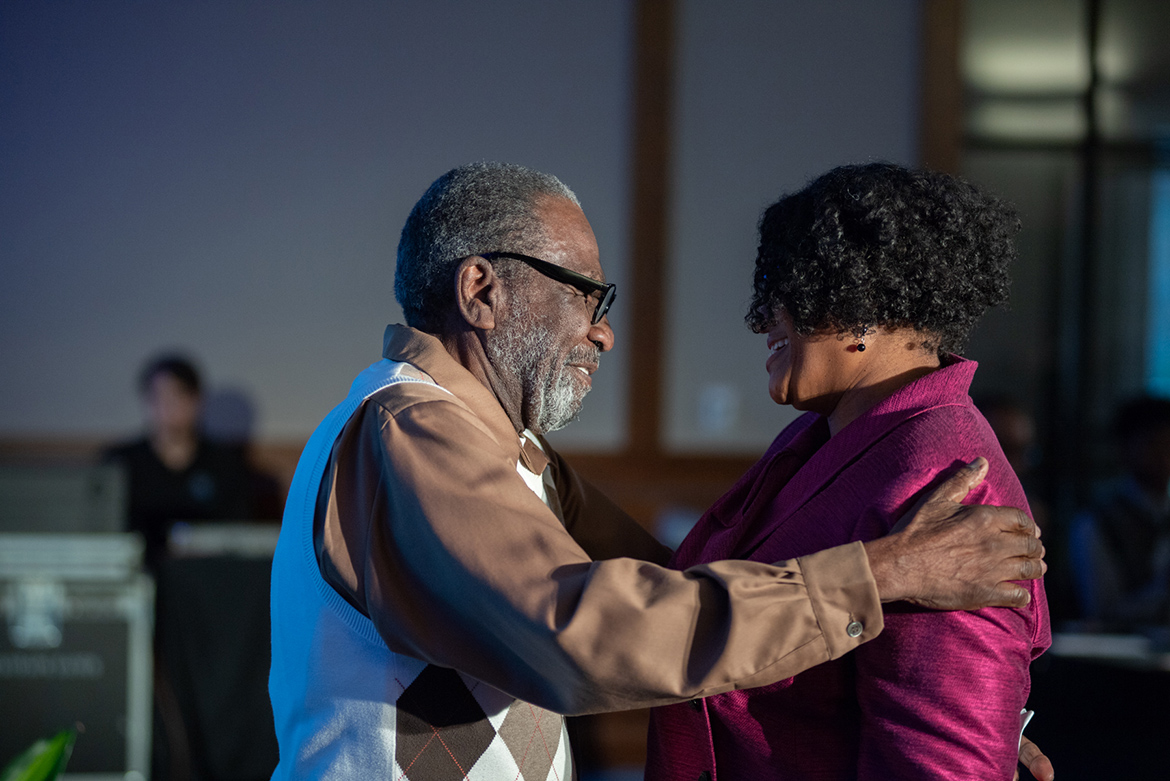 John Pleas, professor emeritus of psychology, left, congratulates Leah Lyons, professor French and interim associate dean of the College of Liberal Arts, for being the 2020 recipient of the John Pleas Faculty Recognition Award at a ceremony held Thursday, Feb. 13, in the Sam H. Ingram Building. (MTSU photo by James Cessna)

Pleas reminded faculty members in the audience not to downplay their efforts simply because the student body changes with each graduating class.

“There are students out there asking about you, and if they saw you, they would tell you that you were a great teacher and that you influenced them,” Pleas said.

2019 Pleas Award recipient Frank Michello, a finance professor in the Jennings A. Jones College of Business, emceed and hosted this year’s ceremony.

For more information about the John Pleas Faculty Recognition Award or MTSU’s celebration of Black History Month, contact Daniel Green, director of Intercultural and Diversity Affairs and chair of the Black History Month Committee, at 615-898-5812 or daniel.green@mtsu.edu.