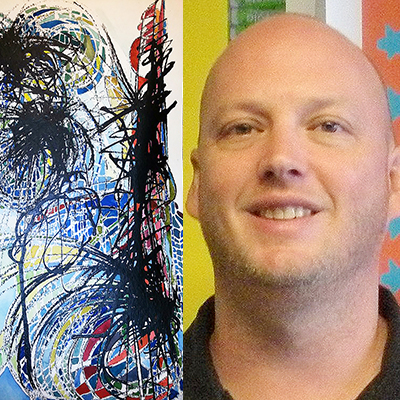 MTSU sociology and anthropology professor William H. “Will” Leggett’s work is part of a new art exhibit on display through Friday, June 12, in the Rotunda Gallery of Murfreesboro’s City Hall, located at 111 W. Main St.

Leggett, a cultural anthropologist who focuses his academic expertise on globalization, colonization, economic anthropology and urban anthropology, is a 2013 Outstanding Teaching Award recipient from the MTSU Foundation and a member of the advisory board for MTSU’s Center for Popular Music and the university’s Institutional Review Board.

He’s also a gifted painter whose diverse art subjects include “cityscapes, portraits, and landscapes that are dynamic, colorful and constructed in a style that speak of interpretation of subject over feigned realism,” said Eric Snyder, chair of the Murfreesboro City Hall Art Committee and director of MTSU’s Todd Art Gallery.

Leggett is the author of “The Flexible Imagination: At Work in the Transnational Corporate Offices of Jakarta, Indonesia,” a behind-the-scenes ethnography examining the social interactions between individuals from different cultural and national backgrounds working together in some of Southeast Asia’s most notorious Fortune 500 corporations.

The professor currently is researching the changing demographics in Middle Tennessee, focusing on the challenges immigrants and refugees recently settled in Rutherford County face in maintaining a healthy diet and lifestyle.

Taub’s work focuses on wildlife and nature, while Wright says her photos are “…a rather eclectic collection of subjects.”

All exhibits at Murfreesboro City Hall’s Rotunda Gallery are open to the public at no charge. Exhibit hours are 8 a.m. to 4:30 p.m. Monday through Friday. A free public reception for the artists also is planned Friday, May 8, from 4:30 to 6 p.m.

You can learn more about the exhibit at the Rotunda Gallery’s Facebook page, www.facebook.com/RotundaArt.
— Gina E. Fann (gina.fann@mtsu.edu)

MTSU anthropology professor Will Leggett’s “Fishy Griffin III,” above, and “VI” below, are part of a new art exhibit at Murfreesboro City Hall’s Rotunda Gallery through June 12.