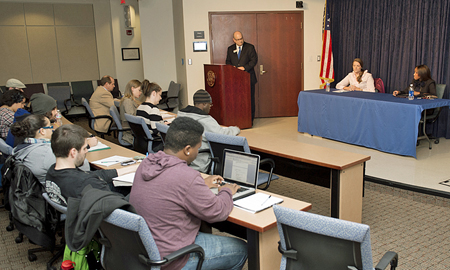 While the presidential election may have been the year’s biggest news story for many, it was the fictitious congressional campaign in Tennessee’s fictitious 10th District that captured the attention of students in two classes of political science and mass communication.

For the second year in a row, the instructor of a class that focused on political campaigning intertwined his curriculum with the lessons taught by a mass communication instructor in a separate Media Writing class.

The result? The Political Campaigning class created a mock congressional campaign, which divided the class into Republican and Democratic candidates and campaign staffs. And the Media Writing class wrote stories on the campaigns, including simulated press conferences, events and debates.

What made it more interesting was the background of the instructors: Kent Syler, an assistant professor in political science, was the chief of staff for former U.S. Rep. Bart Gordon. Andrew Oppmann, an adjunct professor in journalism, worked as an editor, reporter or executive at 12 newspapers across the country, including stints as publisher of Gannett newspapers and news websites in Murfreesboro and Clarksville.

Seated at the table on the right, political science students Jessica Dowd, left, and Chloe Harris play opposing candidates in a mock debate that Mass Communication students covered as part of their course. Adjunct journalism professor Andrew Oppmann (at lecturn) and Kent Syler, political science assistant professor, collaborated to give their students a more real-world experience in their disciplines. (MTSU photos by Andy Heidt)

“Andrew and I brought some real-life scenarios into play with these students, which kept them on their toes and engaged,” Syler said. “The result was a more intense and realistic set of exercises — a lot more interesting than just reading about them in a book.”

The students in Syler’s class brought to life the campaigns of two made-up candidates: “Chloe Harris,” the fictional Democrat, and “Jessica Dowd,” the fictional Republican. Other students in the class served as campaign managers, press secretaries and campaign workers.

The students in Oppmann’s class comprised a press corps that covered three events in the campaign: The campaign announcements, a breaking news story and a candidate debate at semester’s end, with three students in Media Writing serving as the panel of questioners.

“Kent’s students kept my reporters hopping,” said Oppmann, who also serves as an associate vice president for MTSU. “And it was great to offer them a set of experiences that come close to what they might encounter as reporters for a news organization.”

“I really loved doing this, as I do have aspirations of becoming involved in politics,” Dowd said. “This process allowed me to get an idea of what being in politics was like. I was really surprised by the questions that were asked, as they were occasionally tough, real political questions. Being questioned about these political issues by my peers is what made this process very challenging.”

Harris, a junior political science major with a concentration in pre-law, echoed that sentiment, describing the collaboration as “very interesting.”

“I think that it was useful because in the political arena there is so much interaction with media,” she said, “and because media is a direct gateway to the public, it is important to learn how to use it effectively and how it can either enhance or cause damage to the public’s point of view toward a particular person or group of people.”

Harris, 20, a Nashville resident, added that she also learned how press releases and press conferences can help put a desired point of view out to the public to “get them on your side. It also lets them know who you are and what your stance and views are on certain topics that will directly affect them.”

And in a hyper-connected media landscape where smartphones can capture audio and video in an instant, the political stakes are always high.

“Everything you say and do is being watched by somebody and therefore it is always important to be an honest and positive person of good morals at all times,” Harris said. “Because once the public has a certain view of you, it is hard to change it so you want to make sure that you are always putting the correct image out there. First impressions are lasting impressions!”

And the collaboration drove home the fact that the news reporters shaping those impressions have their own stories to tell.

Said Harris: “At the end of the day, (journalists) answer to the public and the people want the truth and so once (media) get it that’s all they are putting out, no matter if it discredits you or diminishes your character… it’s the truth, and they will seek to get it at all costs.”

“One of the biggest things was learning how to objectively write without twisting the story,” said the 23-year-old journalism major from Lewisburg. “Also learning how to quote properly and tie those quotes into a story was very helpful.”

Nash, who served as one of the questioners at the mock debate between the two candidates, said covering the mock press conferences and other campaign events were valuable experiences. By the time the debate came around, Nash and other students had honed their questioning skills.

“We had to learn how to come up with questions to ask not only the candidates, but the people who work with them,” she said. “At the first press conference, it was really a struggle, but by the final debate, we had so many different ideas about things to ask and we were really able to expand.”

The intersections of the two courses also allowed Syler to provide insights to the Mass Communication students on the workings of a political campaign, while Oppmann shared his perspective on media operations to the Political Science students.

MTSU political science assistant professor Kent Syler, right, talks with his student ‘candidates’ Jessica Dowd, left, and Chloe Harris in preparation for a mock political debate. Students in a Media Writing course taught by adjunct professor Andrew Oppmann covered the debate as part of a collaboration between the classes.

In their past careers, Syler and Oppmann found themselves in roles similar to those they simulated for the classes: In 2009, Oppmann was the moderator of well-attended town hall session by Gordon, organized by Syler, where the congressman fielded questions about the beginnings of the Affordable Care Act championed by President Barack Obama.

“As we crafted the scenarios for our classes, we were able to draw upon a lot of the experiences we had in our old jobs,” Syler said. “That’s what helped make this effort more realistic for our students.”

“It was definitely a real world experience,” said Ross, a 23-year-old sophomore from Nashville majoring in business administration. “I think it was helpful because we had to learn how to do it ourselves. We had to come up with the information ourselves and find the story in it.”

Ross was also impressed by the enthusiasm from the political science students as the mock debate covered topics ranging from abortion to health care reform to legalizing marijuana.

“They were really into their characters,” she said of candidates. “There was a real debate. It was definitely entertaining. … It got intense, I’m telling you.”

Oppmann said the instructors hope to continue the cross-pollination of the two classes in future semesters.

“Our students have said it’s been valuable and we’ve enjoyed watching them getting engaged and involved,” he said.

The students enjoyed the process as well.

“I hope more of my classes do this. It makes learning fun,” Ross said.