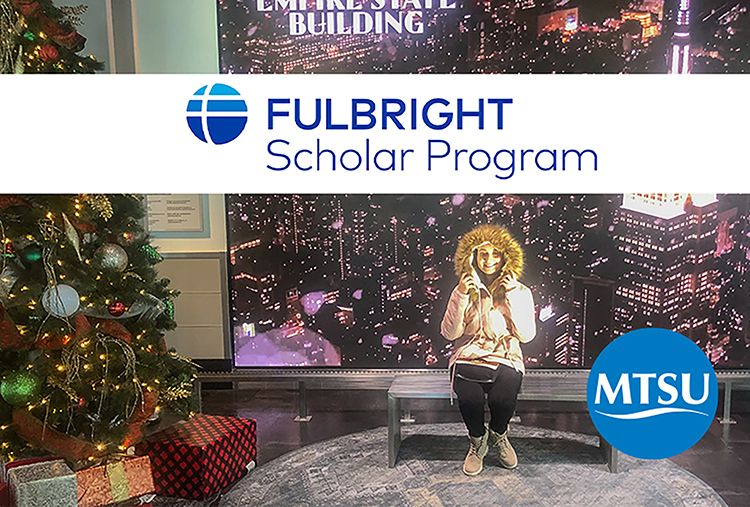 As a graduate student in the Master of Arts in International Affairs program at Middle Tennessee State University, Esra Biala brings a special perspective to the Blue Raider campus.

“I am from Tripoli, which is the capital of Libya,” Biala said. “Libya is located in North Africa, and I am (a member of) an indigenous group of people there called Amazigh, and we have our language that is called Tifinagh.”

Biala, who won a Fulbright Foreign Student Program award, chose to use her scholarship to study at MTSU. The program offers qualifying graduate students, young professionals and artists from abroad like Biala the opportunity to study and conduct research in the U.S.

Biala said MTSU appealed to her because the international affairs master’s program offers course options with different and nuanced perspectives.

“There are a variety of electives and classes through the program that allow me to explore a deeper, more nuanced part of international affairs,” Biala said. “It’s one of the best programs in the field. I also have the opportunity to work as a graduate assistant assigned to the Office of International Affairs, which is huge in developing my career.”

Before arriving in Murfreesboro, Biala completed her undergraduate degree in translation and interpretation in spring 2021 in her hometown at the University of Tripoli where — no stranger to world travel — she also studied abroad for a year in the Eastern European country of Latvia. She then spent a year working for several nongovernmental and civil society organizations.

Because Biala wanted to continue her education in the U.S., her University of Tripoli professors encouraged her to apply for the Fulbright.

She undertook the rigorous application and interview process, and, “after knowing that I had been accepted, I cried and felt a lot of emotions at once, but what I remember the most was feeling ecstatic,” she said.

As she wrapped up her first semester on campus, Biala said the True Blue faculty and community have been wonderful.

“Dr. Jon DiCicco (professor in the Department of Political Science and International Relations) created an inclusive environment where everyone contributed to his class and was valued, his seminars facilitated in a way where all student voices were heard,” she said. “My advisor, Dr. John Maynor, is incredibly responsive, knows how to help, is a trusted advisor and a valuable resource, and I am lucky to have him.

“I have also met a lot of wonderful people through the different events hosted by the Office of International Affairs, and I feel very immersed in the community that we have here.”

Maynor, who also serves as director of the master’s program, said hosting Biala is a great honor.

“Having a Fulbright scholar is a recognition of the quality and diversity of the MAIA (Master of Arts in International Affairs) program, and Esra brings an important and unique perspective to our student body,” Maynor said.

Maynor said having a student body that reflects global and diverse perspectives, like Biala’s, is essential to his program.

“We pride ourselves on bringing together students from all over the world and the United States in a safe and intellectually stimulating environment,” he said. “In addition to international students, our domestic students come from a wide range of backgrounds including recent immigrants, refugees and others who make up the unique and growing multicultural population of greater Nashville.”

Maynor said this diversity, combined with experienced faculty, courses that develop theoretical and practical skills, and a practicum internship, make the program “one of a kind” in Tennessee.

“We’ve had interns placed at government agencies such as the U.S. Citizenship and Immigration Services, the Tennessee Bureau of Investigation, the Tennessee Department of Economic and Community Development, nongovernmental agencies like the Nashville International Center for Empowerment and more. We have graduates currently working for the United Nations, the U.S. Department of State, the FBI, NGOs like the American Red Cross and more.”

“It is a sign of the recent strides the College of Graduate Studies has made in promoting and expanding graduate programs and demonstrates that, along with our recent elevation to R2 Research status, the university is moving in a positive direction.”

Maynor encouraged those interested in the Master of Arts in International Affairs program to contact him at John.Maynor@mtsu.edu.

Current students or alumni interested in the Fulbright Scholars Program should contact Laura Clippard, fellowship advisor in the University Honors College, at Laura.Clippard@mtsu.edu or visit the Fulbright website at https://fulbrightscholars.org.