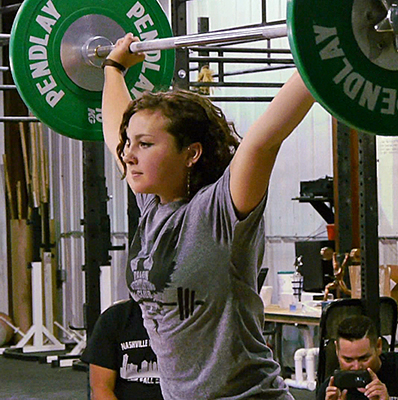 Jenny Lutkins, a 40-year-old weightlifting coach from Franklin, Tenn., hoists a 10-kilogram weight over her head in “Lift Like a Girl,” a documentary by MTSU assistant professor Allie Sultan. The film will be shown Sept. 15 as part of MTSU’s Women’s and Gender Studies Research Lecture Series. (photo submitted)

“Lift Like a Girl,” a short documentary produced and directed by MTSU assistant professor Allie Sultan, will be shown at 3 p.m. Sept. 15 in Room 100 of the James Union Building.

A printable campus parking map is available at http://tinyurl.com/MTSUParkingMap.

Sultan, who teaches in the Department of Electronic Media Communication, will use the screening as a catalyst for discussion under the theme of “Women Creating Women: Issues of Representation in the Media.”

“We made this film to challenge images and ideas of beauty in our media culture,” said Sultan. “We look forward to sharing the film and discussing women’s representation in the media with students, faculty and staff at MTSU.”

The documentary tells the story of MTSU alumna Jenny Lutkins, a 40-year-old Franklin, Tennessee, resident who became frustrated with numerous unsuccessful diet and exercise regimens following the birth of her son.

When Lutkins turned to weightlifting, it transformed her concepts of feminine health and beauty. Now, as a coach, she imparts what she has learned to young female weightlifters.

MTSU assistant professor Allie Sultan, right, of the Department of Electronic Media Communication pauses for a photo with the subject of her award-winning documentary short “Lift Like a Girl,” Jenny Lutkins, at the 2016 Nashville Film Festival. (Photo courtesy of the College of Media and Entertainment)

Sultan has more than 15 years of experience as a picture and sound editor for films, documentaries, reality television and visual effects. She earned her bachelor’s degree in recording industry from MTSU and her master’s degree in cinema from San Francisco State University.

Each academic year, the Women’s and Gender Studies Research Lecture Series presents a wide range of feminist perspectives from MTSU faculty and students at informal gatherings.

This event is free and open to the public. Off-campus visitors attending the event should obtain a special one-day permit from MTSU’s Office of Parking and Transportation at www.mtsu.edu/parking/visit.php.

For more information, contact the Women’s and Gender Studies Program at 615-898-5910 or womenstu@mtsu.edu.