Dyslexia Center at MTSU welcomes freshman as one o...

An MTSU freshman whose early struggles with school work frustrated him and befuddled his parents has embarked on a college career with pride and confidence.

After his school tested him in the third grade, Aaron Lile’s parents found out he had a specific learning disability in reading fluency. To learn whether he had dyslexia, they turned to the Tennessee Center for the Study and Treatment of Dyslexia on the MTSU campus.

Dyslexia is a learning disability that affects a person’s ability to sound out words, to read text quickly and accurately and to spell. October is Dyslexia Awareness Month. 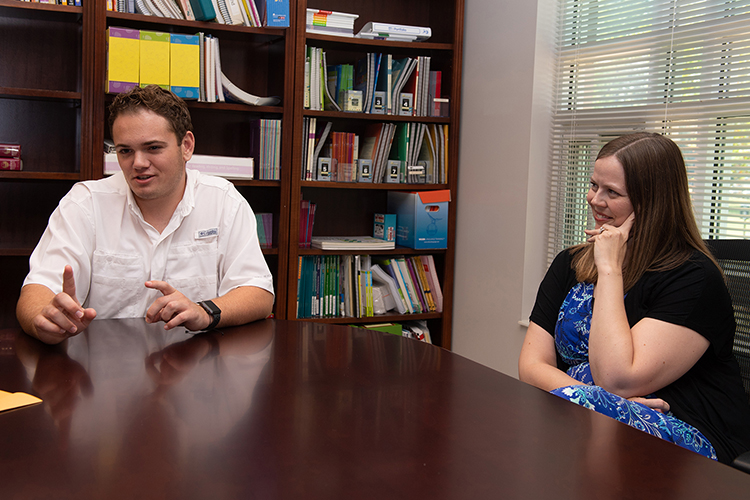 Aaron Lile, left, and Erin Alexander, assistant director for clinical services at the Tennessee Center for the Study and Treatment of Dyslexia at MTSU, discuss how he learned to work with his dyslexia to improve his reading abilities.   (MTSU photo by James Cessna)

“A lot of parents call us because they’re No. 1, not sure if the reason for the difficulties is dyslexia, and then, more importantly, what to do to help their student or their child be most successful,” said Erin Alexander, the center’s assistant director for clinical services.

The center’s personnel evaluated Aaron to determine whether he had the characteristics of dyslexia. The condition is difficult to describe to someone who doesn’t have dyslexia, Aaron said.

“Imagine someone looking at a foreign language and trying to read it,” he said. “Say you take one year of Spanish in high school, and then you’re trying to read a full Spanish paragraph.”

Dyslexia might slow down a student’s progress, but that doesn’t mean she or he is less intelligent than others. Students with dyslexia can be perceived as having low intelligence by those who aren’t trained to detect the learning disorder.

“When you struggle to read each word individually, then how fluently you finish that sentence matters,” said Aaron’s mother, Dawn Lile, “so by the time you get to the fourth and fifth sentence, reading word by word, you’ve literally lost the meaning of the first, which is the topic sentence.” 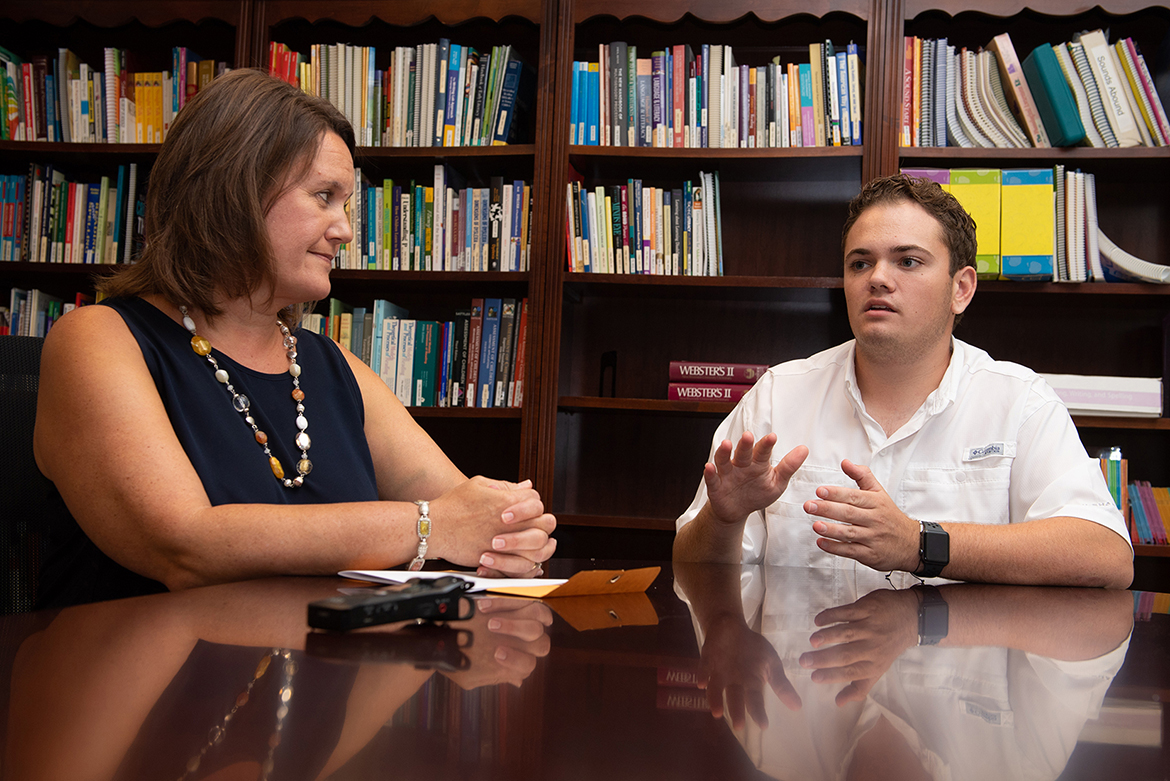 Aaron Lile, right, an MTSU mechatronics major who benefitted from childhood assistance from the Tennessee Center for the Study and Treatment of Dyslexia, and his mother, Dawn Lile, who attended several workshops for parents at the center to help her son, listens as her son describes what it’s like to try to read while struggling with dyslexia. (MTSU photo by James Cessna)

Aaron has no such difficulty with numbers. His proficiency in math and his appreciation for hands-on learning serves him well as a mechatronics engineering major in MTSU’s Department of Engineering Technology.

The center also worked with Dawn Lile one-on-one and in workshops to make sure that Aaron received good support from his parents.

“I was able to educate myself with what we do at home,” Dawn Lile said. “We learned not to be frustrated and not to sit for hours at a time trying to pound in what we didn’t get to during the day.”

The center will host another workshop titled “Empowering Parents of Struggling Readers” from 8:30 a.m. to 3:30 p.m. Saturday, Nov. 16, in six different locations across the state and online. More information is available at https://mtsu.edu/dyslexia/ParentsDayEvent.php.

In 2016, the Tennessee General Assembly passed a law requiring all school districts to screen students for dyslexia.

“We know through research that the earlier we identify students with characteristics of dyslexia and put in intervention in those early grades, the better the outcome will be for the student,” Alexander said.

Identifying his needs, getting assistance and being diligent enabled Aaron Lile to graduate from Murfreesboro’s Riverdale High School as its co-salutatorian, tying his class’s 10th highest grade-point average. He interned at the Nissan Smyrna vehicle assembly plant and received a Presidential Scholarship from MTSU.

Likening her son’s journey to a trek up a steep mountain, Dawn Lile said persistence was the key to reaching the top and enjoying the view.

“Those little glimmers of light that come in, that trickle through, those little steps that you see, the little accomplishments along the way are the reminders that the view is certainly worth it,” Dawn said.

For more information on the Tennessee Center for the Study and Treatment of Dyslexia at MTSU, contact the center at 615-494-8880 or visit www.mtsu.edu/dyslexia. 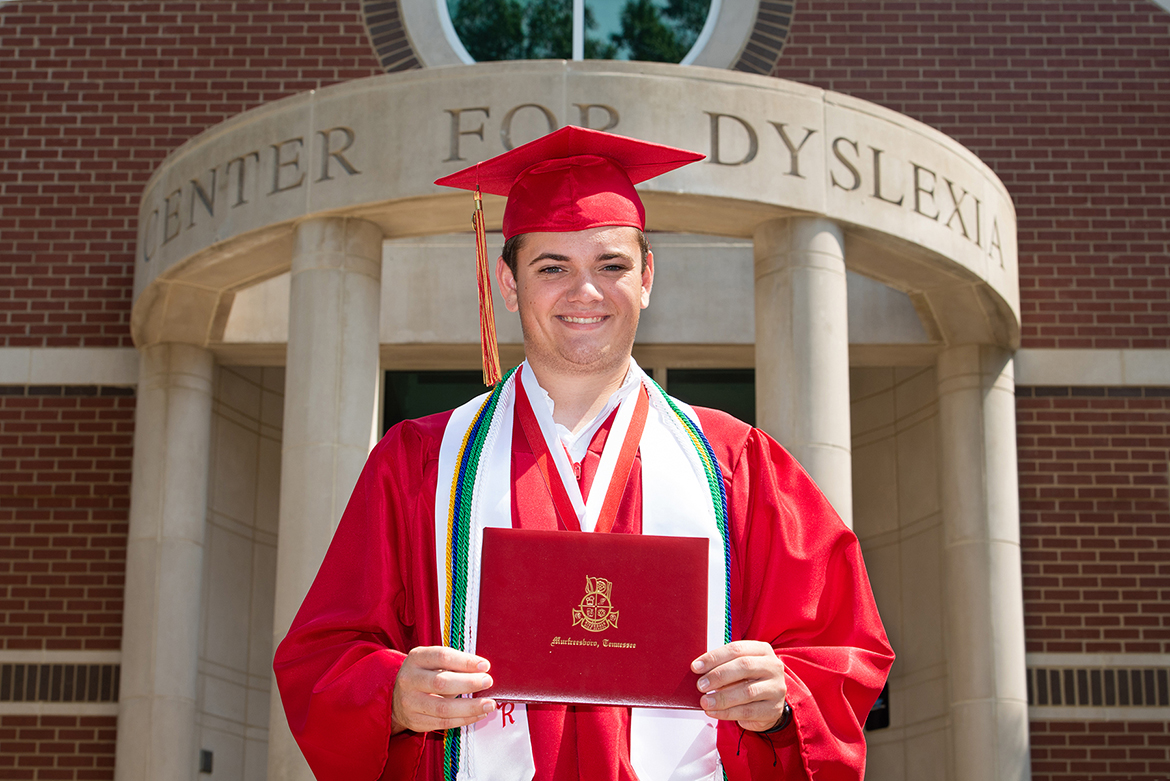 Aaron Lile poses outside the Tennessee Center for the Study and Treatment of Dyslexia in the academic regalia he wore at his 2019 graduation as co-salutatorian of Riverdale High School in Murfreesboro. (MTSU photo by James Cessna)