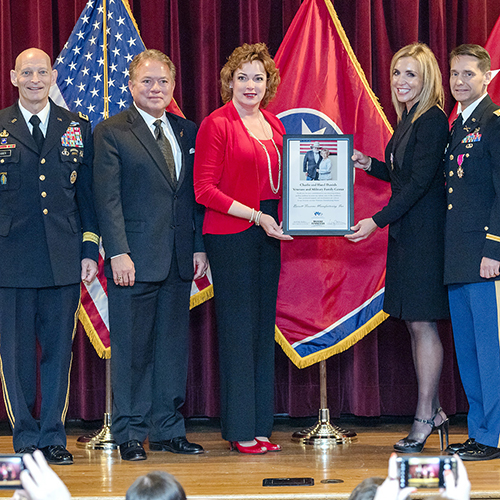 Ronnie and Donna Barrett knew they were attending a retirement ceremony on the MTSU campus Friday, Feb. 24.

Little did they know they would be sharing center stage momentarily with the honoree.

The Barretts, owners of Christiana, Tennessee-based Barrett Firearms Manufacturing, received a framed certificate from Keith M. Huber, senior adviser for veterans and leadership initiatives at MTSU, for the company’s “hiring veterans and allowing them to continue to serve” after retiring from the military, Huber said.

Barrett Firearms Manufacturing received the first framed certificate of appreciation from MTSU and the Charlie and Hazel Daniels Veterans and Military Family Center for hiring veterans to work for the company. Shown during the Feb. 24 presentation in the KUC Theater are Keith M. Huber, left, senior adviser for veterans and leadership initiatives; company co-founder Ronnie Barrett and his wife, Donna; and Dr. Hilary and Joel Miller. (MTSU photos by J. Intintoli)

The framed certificate idea originated with Huber and Dr. Hilary Miller, director of the Charlie and Hazel Daniels Veterans and Military Family Center. The Barretts received the first framed certificate, and Huber and Miller say they plan to recognize other businesses and individuals in the future.

“We are pleased to be recognized for the Veterans Transitioning Home,” Ronnie Barrett said after the 45-minute program ended. “It is always a good idea to hire a veteran. We have done well in hiring veterans in the 35 years we have been in business.”

Donna Barrett is an MTSU alumna and former state representative.

Miller officially retires Feb. 28 as a U.S. Army lieutenant colonel. Friday, a formal ceremony was held to mark his pending retirement in the MTSU Keathley University Center Theater, followed by a reception in the Daniels Center. Huber, a retired U.S. Army lieutenant general, was the presiding officer.

Miller is a former chair of the MTSU Department of Military Science. This fall, he completed his final military obligation as a history department faculty member at the U.S. Military Academy, his alma mater, in West Point, New York.

His wife, Hilary Miller, is a longtime MTSU employee and former manager for recruitment and resources for the university’s College of Liberal Arts.

Former U.S. Army Capt. Shane Smith was master of ceremonies. He is acting employer search agent for the new Daniels Center’s Veterans Transitioning Home office on the third floor of the KUC.