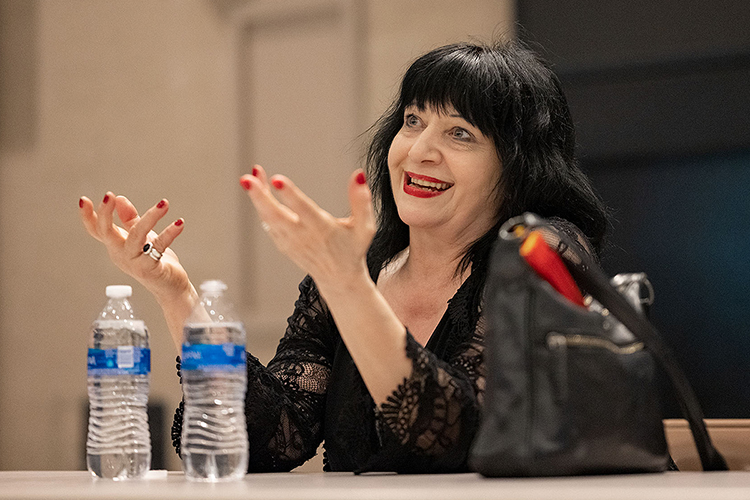 She emerges from the dark at the back of the room while the documentary fades from the screen, all bright eyes and flashing grin and chic black garb.

Postpunk and no-wave priestess Lydia Lunch, the new Fellow of the Center for Popular Music at Middle Tennessee State University, sits down and proceeds to eat the lunch, afternoon snack and late supper of anyone who thought they’d get away with rote questions, adoring gazes and begging for selfies.

Forty-four years on stage, sharing her art and her heart without apology, will do that to a person.

“I say to people who want to be an artist, an architect, a chemist, a doctor, if it doesn’t BURN inside you, you are setting yourself up for a world of pain,” Lunch told a group gathered in the McWherter Learning Resources Center to screen the 2019 documentary “Lydia Lunch: The War is Never Over.”

After 40-plus years of observing society and mining it for her work, Lunch noted during her two-day MTSU visit that the same corruption and complacency she and her compatriots battled in the 1970s is still present.

“Is it worse? No. It’s the same as it was. We just know more about it,” she said. “We have more access to the knowledge, but what are the tools that we can utilize to tear our s— down?”

Lunch, a native of Rochester, New York, emerged from the short-lived 1970s “no wave” scene as the singer/guitarist of Teenage Jesus and the Jerks, embracing confrontational, anticommercial songs with noise-music delivery.

She’s released multiple singles and albums, both solo and with her bands Beirut Slump, 8-Eyed Spy, Big Sexy Noise and her current project, Retrovirus, and has collaborated with artists ranging from Rowland S. Howard to Cypress Grove.

She also expresses her talents as a film actor, director and writer and a spoken-word artist, working as the latter with fellow artists that include Exene Cervenka, Henry Rollins and Hubert “Cubby” Selby Jr.

‘Nothing I’ve ever done is shocking’

“Lydia Lunch has forged her own path, powerfully, without compromise or apology, and she continually and fearlessly challenges us to do the same,” center director Greg Reish said in introducing her as the third Fellow in the CPM’s history.

“She’s been among the first to lay bare the pain and injustice of modern life while empowering all of us to find joy, expression and fulfillment in ways that the culture and industry doesn’t always condone.”

Before a searing spoken-word performance that left several in the audience in tears, Lunch sat with MTSU English doctoral student Harlow Crandall for another question-and-answer session, delving more deeply into the passions that have fueled her work.

Fellow Rochesterian Crandall, whose research investigates the intersections between literature and punk and post-punk music, discovered Lunch’s music his freshman year, when he picked up the Brian Eno-produced “No New York” album showcasing early no-wave artists, including Teenage Jesus and the Jerks.

Crandall subsequently connected with Lunch for an article; she asked to see more of his writing, and the pair, discovering their mutual connections, developed a friendship that led in part to Lunch’s introduction to MTSU’s Center for Popular Music.

Over the years, Lunch told Crandall and the audience, some observers have criticized the content of her myriad projects as “shocking.”

“Honestly, nothing I’ve ever done is shocking, at least to me, because most of the s— I do is based on reality or truth,” she said. “If I make films that might have pornographic content …, it’s because there is a pornographic reality that I have lived through, and it needs to be talked about from a certain perspective.

“I don’t think any of my performances have been shocking. I feel that what I’m dealing with is just honest expression that I have not heard displayed before from a feminine perspective.”

Lunch, the first woman honored as a CPM Fellow, joins her peers, legends Barry Gibb and Lamont Dozier, in a small circle of music pioneers with an extensive influence on the arts and society.

The Center for Popular Music, part of the College of Media and Entertainment at MTSU, named Gibb as its inaugural Fellow in 2013, honoring one of the world’s most successful songwriters with a career spanning more than 50 years.

In 2015, Dozier joined the fold, recognized as a CPM Fellow for his extraordinary accomplishments in music over more than six decades, including his role as the middle third of Motown’s iconic Holland-Dozier-Holland songwriting and production team.

“I love the CPM Fellows program because it brings internationally known artists to our campus to discuss their life and music with our students. Our students get to talk to the artists whom they study in their classes,” said CME Dean Beverly Keel.

“Lydia is truly unforgettable! Her work is so powerful that I found myself just sitting and processing her spoken word pieces. She is so engaged in life, society and culture and truly inspired our students. I look forward to bringing her back for lectures, workshops or anything else!”

To learn more about Lunch and her work, visit her website, https://lydia-lunch.net.

The Center for Popular Music at MTSU is one of the world’s oldest and largest research centers devoted to studying American folk and popular music from the early 18th century to the present.

For more information on the Center for Popular Music and its projects and special events, visit www.mtsu.edu/popmusic. To learn more about the College of Media and Entertainment and its programs, visit, https://mtsu.edu/media.