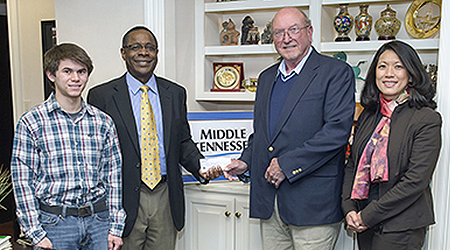 When MTSU freshman Jonathan Lusk moved into Corlew Hall last fall, he and his mother were surprised to learn that the guy helping lug the boxes was President Sidney A. McPhee.

MTSU freshman Jonathan Lusk, left, joins President Sidney A. McPhee in accepting a $100,000 donation to the College of Basic and Applied Sciences from Lusk’s grandfather, William, and his mother, Ju-Hsin. (MTSU photo by J. Intintoli)

The Lusk family later surprised McPhee with a $100,000 donation, which they asked be split between scholarships and a computer science laboratory renovation.

They presented the check to the president during a recent visit to campus.

“My wife and I want to support my grandson and make sure he gets a quality education,” said Jonathan’s grandfather, William C. Lusk, a retired senior executive vice president and CFO for Shaw Industries Inc.

Shaw, a Fortune 500 company, based in Dalton, Ga., is one of the world’s largest manufacturers of carpet and floor coverings.

Jonathan’s mother, Ju-Hsin, recognized McPhee during “We-Haul,” a three-day event each fall when volunteers from across campus pitch in to help about 3,000 students move into MTSU’s 14 traditional residence halls, two apartment complexes and two houses on Greek Row.

Jonathan said that while he appreciated the kindness, he had no idea who McPhee was that busy day.

“The first time I met him was when we were moving into the dorm and he shook my hand,” Jonathan said. “My mom pointed out to me that it was the president.”

McPhee, who helps out during We-Haul each year, said the Lusk family’s gift to the College of Basic and Applied Sciences is deeply appreciated.

“The contribution by the Lusk family will be put to very good use and will help many students,” McPhee said. “We are delighted that the Lusk family honored our university with this generous gift.”

Jonathan is studying computer science and hopes to take advantage of the improvements that his grandfather’s gift will make possible. He said he’s been impressed with campus so far.

Watch a video about the donation below.