In the News: Vaccine hesitancy..

Middle Tennessee State University is fine-tuning its reputation as a “Grammy-winner factory,” this time with the official grand opening of its nearly $2 million “Main Street Studios” facility to train even more music-industry leaders.

“It took the dedication and commitment of the university and so many of our faculty members and friends to bring this project to fruition,” said recording industry professor Dan Pfeifer, an MTSU School of Music alumnus and pro engineer and producer who minored in the department where he’s been teaching since 1991.

“We’re fortunate to have so many talented students in our program, and now that they have these state-of-the-art facilities, I can’t wait to see what they do.” 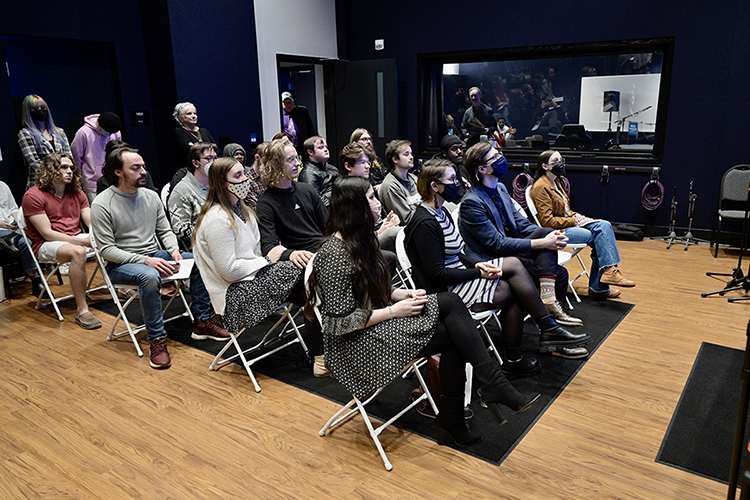 An enthusiastic mostly student crowd listens intently inside the Department of Recording Industry at Middle Tennessee State University’s new Studio D to one of the student-produced tracks featured in the newly rebooted “Listening Night” event in the new Main Street Studios on campus Friday night, Dec. 3. The event, postponed for nearly 18 months because of the pandemic, was part of a grand opening celebration for the nearly $2 million project, which covers almost 5,000 square feet of recording space, control rooms and support space for the relocated Studios D and E. Also listening in are recording industry professor Deborah Shackelford, standing at center left, and Professor Emeritus Chris Haseleu, longtime former department chair and developer of the department’s audio production curriculum, standing in the doorway. (MTSU photo by Andy Heidt)

The students, faculty and staff couldn’t quite wait to see what the new facility could do, either.

The worldwide supply-chain issues still delaying everything from toys to tomatoes also slowed delivery of speaker stands and other equipment that Audio Production Program undergrads and Master of Fine Arts in Recording Arts and Technologies students needed to work on projects and professors needed to get their students a little studio time.

So they found sturdy temporary setups, and the learning and teaching and listening commenced.

The Main Street Studios’ new location was originally a church gymnasium before the church moved and the university bought the property and turned it into office space. When the recording industry department lost offices, classrooms and studios to MTSU’s new School of Concrete and Construction building, the university moved them into the former gym and let them define its space.

That space brought the end-of-semester “Listening Night” events back to life Friday night, too, after the pandemic ended the student-project playback gatherings for nearly 18 months. 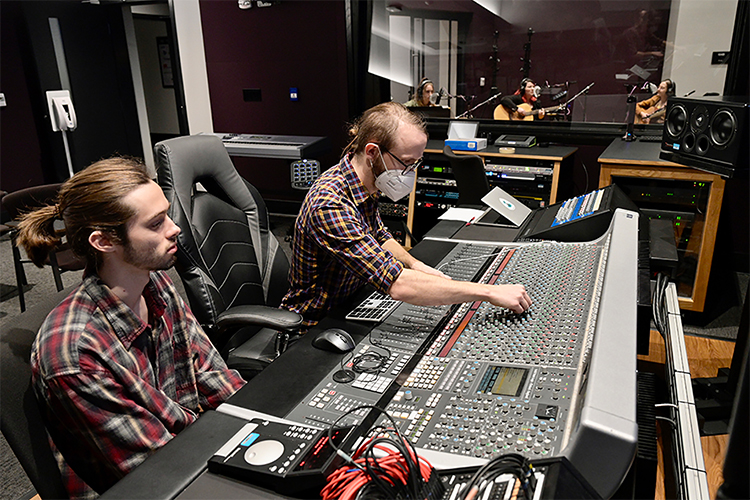 Fox DeVaughn, left, of Tupelo, Miss., a Master of Fine Arts in Recording Arts and Technologies student in Middle Tennessee State University’s Department of Recording Industry, listens as fellow MFA student Nate Stoll of Portland, Oregon, checks the levels on a recording of student songwriters in the control room of the department’s Studio E Friday night, Dec. 3. The students showcased their talents during the grand opening celebration for the university’s new Main Street Studios, a nearly $2 million project that covers almost 5,000 square feet of recording space, control rooms and support space for the relocated Studios D and E. (MTSU photo by Andy Heidt)

Proof of how quickly — and how meticulously — the students are taking to the top-of-the-line equipment played through both studios and into the larger reception area. Listeners’ eyes lit up and they sat with heads cocked to once again hear the students’ painstaking recordings, ranging from digitally crafted techno tracks and video game themes to original and cover songs created live in the studios by student writers, singers and instrumentalists.

“Listening Night has been the premiere showcase for our students since 1978,” said Pfeifer. “COVID may have put us on hold for a couple of semesters, but we are back and ready to celebrate the creative accomplishments of our students.”

Long history of hearing the best

The program serves students ranging from freshmen who’ve used a little Garage Band and gotten hooked on how sound can transport them to industry veterans laid off during the pandemic who decided to turn their expertise into an advanced degree and a teaching career.

When classes are fully integrated into the studios by fall 2022, up to 180 students will be working in these hands-on classrooms around the clock each year.

“For almost a half a century, this program has been preparing highly educated and highly skilled professionals who upon graduation land well-paying jobs and pursue impressive careers. Our internationally renowned recording industry faculty and Grammy Award-winning engineers have worked diligently to build an immersive learning experience that has set the bar as an industry model. …

“The unique, productive partnerships that they have created and nurtured with Bonnaroo, the Grammys and the Academy of Country Music give MTSU students hands-on learning experiences that are simply unparalleled among our university peers,” Byrnes continued.

“We look forward to seeing how our future alumni will invest what they learn in these studios into careers that capture the music, voices, and news that inform and inspire our future, and preserve our past.”

The university also offers an MBA degree with a music business concentration, allowing graduate students to take courses in accounting, economics, finance, information systems, management, marketing, and recording industry to cover every facet of the business end of music.

More than 1,000 students are currently recording industry majors at MTSU. About two-thirds are audio production majors, and the remaining third are music business or commercial songwriting majors. It’s the largest of the programs offered by the College of Media and Entertainment.

Its graduates — and interns — are spread throughout the music industry at major labels, boutique music publishers and studios ranging from backyard-outfitted small businesses to running Jimi Hendrix’s Electric Lady Studios in Greenwich Village.

When the 64th annual Grammy Awards winners are announced Jan. 31, more MTSU graduates’ names may scroll across the screen.

At least seven are nominated for engineering or producing music in categories ranging to country to pop to Latin music to bluegrass to gospel; all but one are returning nominees, and four are returning winners. 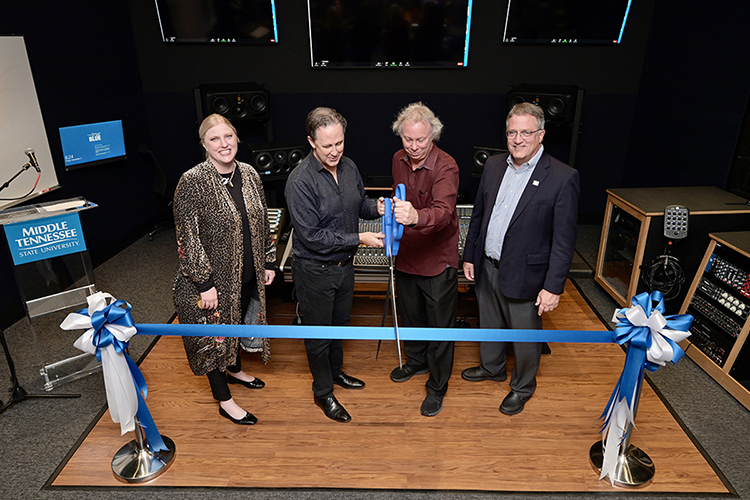 NBC News in 2019 began calling MTSU a “Grammy-winner factory” in the wake of its alumni students’ and staffers’ multiple nominations and wins.

After the 2021 ceremony last March, the number of MTSU-connected Grammy winners over the last two decades has risen to 15 with a total of 37 Grammys, including nine repeat recipients, in categories from classical to pop to rock to country to gospel.

As a result, the Department of Recording Industry’s been on Billboard’s lists of best music business schools lists since 2013, earning consistent praise as a top producer of ready-to-work music pros.

The department was founded in 1973, opened its first campus recording studio in 1980 and was the first program in the country to release a fully student-created CD in 1985. It also collaborates with MTSU’s School of Music on a “music industry” minor for students in music-industry entrepreneurship or recording industry.

Department chair John Merchant, who remains a working producer and musician like many of his faculty and staff, said he’s “thrilled beyond measure” with the months of collaboration that led to Friday’s grand opening.

“These studios turned out way better than I thought they were going to, and although the path to get here was often rocky, we’re thrilled for what we’re seeing and hearing,” he said. “Obviously it’s hard to know what the impact of these new studios will be, but I can tell you that in the short term, our students are extremely excited about this opportunity, as they should be.

“Every day we’re going to come in and try to do right by our students, by the university, and to keep us as industry-facing, as progressive and positive as we can, so that with the training and education they receive here, our students are ready to go out in the world and not just survive but thrive.” 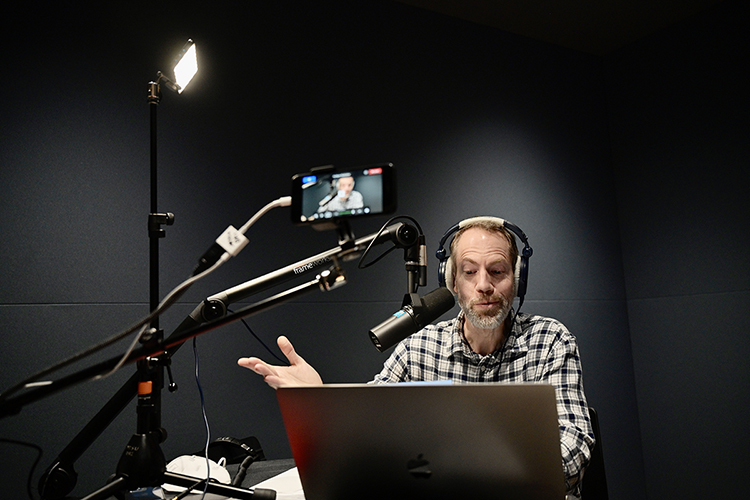 Michael Fleming, an audio production professor in the Department of Recording Industry at Middle Tennessee State University, makes excellent use of his years in public radio as he hosts the department’s rebooted student-project “Listening Night” event in the newly opened Main Street Studios on campus Friday night, Dec. 3. The event was part of a grand opening celebration for the nearly $2 million project, which covers almost 5,000 square feet of recording space, control rooms and support space for the relocated Studios D and E. (MTSU photo by Andy Heidt)