‘Anybody can be an entrepreneu.. 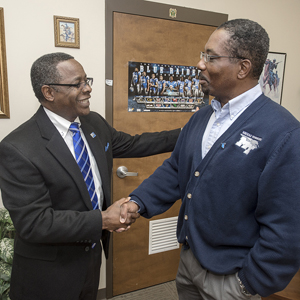 The way MTSU President Sidney A. McPhee sees it, Ron Malone deals with “one of the most challenging activities on this campus: parking.”

Malone was recognized Wednesday for meeting that challenge for the last 13 years as assistant vice president for events and transportation, as well as the other challenges he’s resolved in his 25 years of work at Middle Tennessee State University.

MTSU President Sidney A. McPhee presents Ron Malone, assistant vice president for events and transportation, with the President’s Silver Column Award Wednesday morning in Malone’s office inside the Parking Services Building. McPhee presents the award to employees he feels “go above and beyond” the call of duty. (MTSU photo by Andy Heidt)

McPhee made a surprise visit to Malone’s office inside the Parking Services Building Wednesday morning to present him with the President’s Silver Column Award, a special lapel pin that recognizes “individuals who go beyond the call of duty to make this campus a place that is conducive to learning and a caring place.”

Malone, who also managed Murphy Center and worked in admissions and advising before moving into his current role, becomes the seventh President’s Silver Column Award honoree. McPhee established the award in 2004.

McPhee applauded Malone and his staff “for the incredible job you do behind the scenes” in transportation services every day, making special note of this summer’s long-awaited opening of two new student parking garages that added almost 1,000 parking spaces.

McPhee called Malone an “ideal employee” who is hardworking and “works smart,” adding that he displays a consistent “calmness in the storms” of dealing with parking and transportation concerns.

“We have a great institution, but we would be an even greater university with the model you have shown as a person, as an employee and as a colleague,” added McPhee, who was joined at the presentation by MTSU Senior Vice President John Cothern, who oversees the university’s Division of Business and Finance.

During remarks at the August 2013 grand opening of the MTSU Boulevard Garage, Ron Malone, MTSU assistant vice president of events and transportation, applauds the decadelong efforts by the university community to add student parking garages on campus. (MTSU file photo by J. Intintoli)

A “very humbled” Malone credited his staff for the recognition.

“We’ve got so many wonderful people that work here at this university, and my staff is without a doubt the best. And that’s what this stands for, it’s for the great staff in Events and Transportation,” he said. “They make me look good, and I’m very appreciative of the work that they do. This award is for all of us.”

Ron Malone, then assistant director of admissions, assists Kevin Perry, then a re-enrolling senior from Pulaski, Tenn., during January 1993 registration in Murphy Center in this archived front page of the first edition of “MTSU Record,” the university’s community newspaper, published Jan. 15, 1993. The cutline under the photo on the page notes that spring 1993 enrollment was up 9.57 percent — to 15,583 students — over the spring 1992 figures. (Photo from MTSU News and Media Relations archives)