MTSU on WGNS: Small business a.. 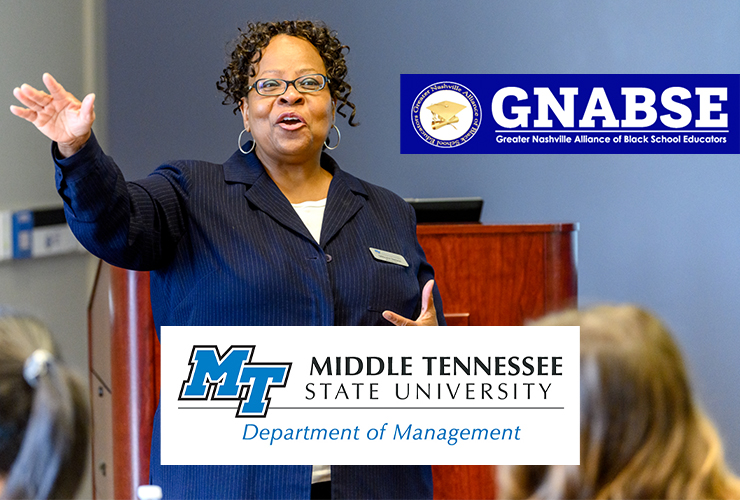 The Greater Nashville Alliance of Black School Educators will formally recognize Nelson, an 18-year veteran of the Jennings A. Jones College of Business and currently an associate professor, during a virtual ceremony in late August as the recipient of the 2022 GNABSE Outstanding Higher Educator of the Year Award.

The alliance is “a group of professional educators dedicated to promoting excellence in the education of all students, particularly students of African descent.” As part of its mission, the alliance holds a scholarship and awards gala to present scholarships to future educators, to recognize outstanding educators, and to spotlight talented students.

“They’re all about bringing forth a successful student, providing students with a model for excellence in the classroom,” she said. “When I started finding out what they’re mission was … I was really excited. It was really rewarding and also humbling.”

“We are so excited and pleased to honor Dr. Millicent Nelson for her outstanding contributions to education,” said Roberta Hill, Ph.D., president of the alliance. “Her many accomplishments are a testimony to her passion and commitment. Congratulations, Dr. Nelson.”

Nelson’s higher education award will be presented along with two other educator awards, Teacher of the Year and Principal of the Year. She noted that being nominated for the award required her to submit an extensive packet of information outlining her educational, academic and professional background, community service as well as an essay about her mentorship of students. And two letters of recommendation.

“It was a rigorous process,” she said, adding that it was a fellow Lane College alumnus who is a member of the alliance that nominated her.

Before moving into higher education, Nelson worked for years as a corporate executive for what was then telecommunications giant BellSouth in Atlanta. As part of that work, she conducted a lot of training sessions — something she enjoyed and which laid the foundation for her eventually pursuing and earning her doctorate at Oklahoma State University and entering academia, joining MTSU in 2004.

“I felt like (teaching) was a gift from God to use and help others,” said Nelson, who teaches a number of courses at the undergraduate and graduate levels within the Department of Management and is director of the Health Care Management Graduate Certificate Program.

Nelson initially thought she would teach at a historically black college and university, or HBCU, to have the most direct impact on Black students. After all, she received her undergraduate and master’s degrees from two HBCUs, Lane in her native Jackson, Tennessee, and Atlanta University (now Clark Atlanta University), respectively.

But she would eventually discover that her presence as a Black faculty member at predominantly white institution like MTSU may have an even bigger impact on the African American students she encounters in the classroom on the Blue Raider campus.

“Over the course of being at MTSU, it has been so rewarding to teach minority students and be a role model for them and just be an advocate for them,” she said. “But it was also important for the majority students to see minority professors who are capable and able to provide them with direction and instruction that could be helpful to them. Our students are going to be entering a very diverse work environment.”

Nelson also revived a dormant student NAACP chapter when she arrived, herself being a longtime member of the venerated civil rights organization. Among activities the chapter has organized are periodic marches to the polls to vote in local, state and national elections.

“It was something I thought was important for our students. In order to have a ‘whole student,’ they need to understand what’s going on in the world around them,” she said. “They need to be concerned with their civil liberties along with those of everyone else. And voting, that’s always been a big deal to me.”

As faculty advisor for the chapter, Nelson says she’s proud that the current chapter president, Paige Jackson, will be able to attend the NAACP’s national conference in New Jersey this year thanks to assistance from the local NAACP branch. She’s working to see if she can get funding for a second student to attend.