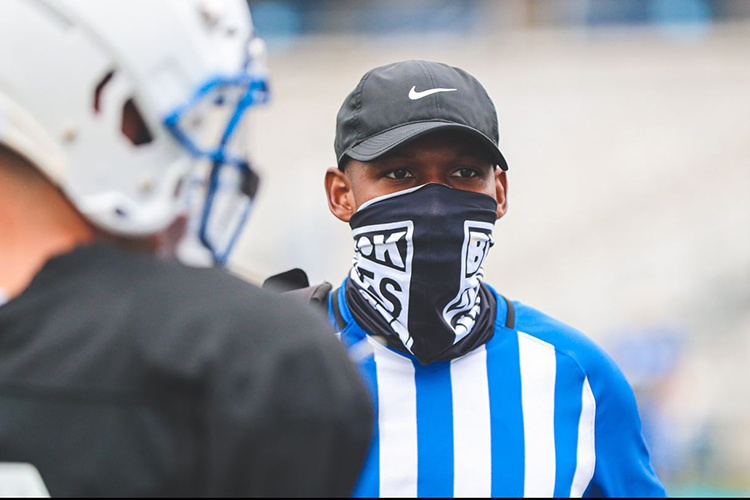 In this undated photo, MTSU Associate AD for Equipment Operations Larry Maples looks on during a Blue Raider football practice. Maples was recently honored as the 2020 Jeff Boss District IV Equipment Manager of the Year. (Photo by MTSU Athletics Communications)

MTSU Associate AD for Equipment Operations Larry Maples was recently honored as the 2020 Jeff Boss District IV Equipment Manager of the Year, according the MTSU Athletics Communications. It marks the second time Maples has earned the award as he also was tabbed in 2017.

Maples, a native of Memphis, Tennessee, is embarking on his sixth season with the Blue Raiders where he oversees all equipment operations while also being involved in facility upgrade projects.

Maples made his way to Murfreesboro in 2016 after spending the previous year as a supply chain engineer for Mueller Industries. Maples, who is a member of the United Way of Rutherford and Cannon Counties Diversity, Equity, and Inclusion Advisory Council, has also worked as an industrial engineer for Electrolux Home Cooking Products.

Maples, who is married to the former Carmen Merritt, earned his undergraduate degree from Middle Tennessee in Engineering Technologies (2013). The couple has a daughter, Chloe, who is 2 years old.

For the latest news on MTSU sports, visit www.goblueraiders.com, the official website for Blue Raiders athletics.