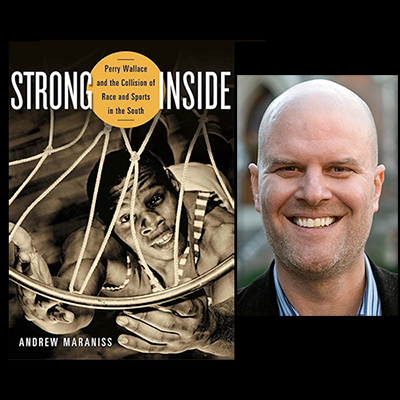 Writer Andrew Maraniss, author of “Strong Inside: Perry Wallace and the Collision of Race and Sports in the South,” will speak at MTSU at 6 p.m. Monday, in the State Farm Lecture Hall in the Business and Aerospace Building.

The event, which is sponsored by the College of Liberal Arts, is free and open to the public. A searchable campus parking map is available at http://tinyurl.com/MTSUParking2015-16.

He was the guest on the ‘MTSU On the Record’ radio program, which first aired Nov. 2 on WMOT-FM (89.5 and www.wmot.org ). You can listen to his conversation with host Gina Logue below.

“(Wallace) told me that he would look at the Vanderbilt schedule before each season and look at the road trips he was about to take with the deepest sense of dread,” Maraniss recalled.

“He would imagine …  the worst thing that could happen on one of these trips. In his mind, it was to get shot and killed out on the court during a game or around town before or after a game.”

The author was a recipient of the Fred Russell-Grantland Rice sportswriting scholarship at Vanderbilt. After graduating in 1992, he worked for five years as his alma mater’s associate director of media relations for athletics.

Following a stint as media relations manager for the Tampa Bay Devil Rays of Major League Baseball in 1998, he returned to Nashville to join the public relations firm of McNeely Pigott & Fox, where he still works.