Center for Popular Music rides the rails with old-... 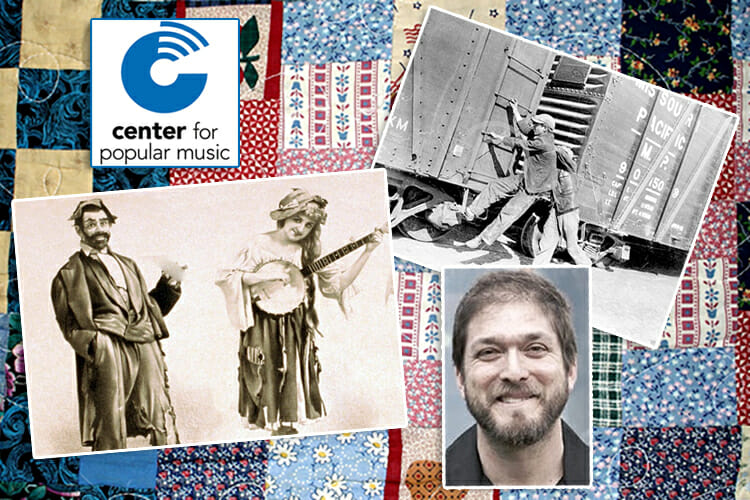 Both Woody Guthrie and the Carolina Chocolate Drops might get a kick out of these new old-time music-loving folks.

Dr. Dan Margolies, a professor of history at Virginia Wesleyan University, will visit MTSU’s Center for Popular Music Thursday, March 15, for a special guest lecture focusing on “trainhoppers,” a group of musicians working to preserve old-time music with their own unique twist.

“Reimagined Old Time Music Cultures in the Trainhopping Punk Rock South,” a free public event, is set for 1 p.m. March 15 inside the center in Room 140 of the Bragg Media and Entertainment Building at MTSU.

CPM Director Greg Reish and MTSU student George Lilly also will join Margolies for a performance of old-time music during the March 15 event.

Margolies, who served as a Fulbright Senior Scholar/Lecturer at Sogang University in Korea among his many honors, is chair of the history department at Virginia Wesleyan and also serves as director of its American Studies Program. His specialty is 19th- and 20th-century U.S. foreign relations, and he also regularly publishes research on ethnomusicology and folklore.

He’s the author of “Henry Watterson and the New South: The Politics of Empire, Free Trade, and Globalization” and “Spaces of Law in American Foreign Relations: Extradition and Extraterritoriality in the Borderlands and Beyond, 1877-1898” and edited “A Companion to Harry S. Truman” and has three more book projects underway.

His MTSU lecture topic serves as the title of his chapter in the 2017 collection “The Bohemian South: Creating Countercultures, from Poe to Punk,” published by the University of North Carolina Press.

In it, Margolies notes that the trainhoppers, who first emerged early in the 21st century at old-time music festivals, “adopted a uniform that differentiated as much as defined. Their style presented a complex synthesis of old-time hillbilly mountaineer, mid-1930s bindlestiff and postapocalyptic chic. … They were passionate, even obsessed, musicians playing furiously paced and reverentially sourced old-time music.”

“Old-time music” is a North American folk genre that’s played on acoustic instruments, usually fiddle, guitar, banjo and mandolin, with its roots in both Celtic and African cultures.