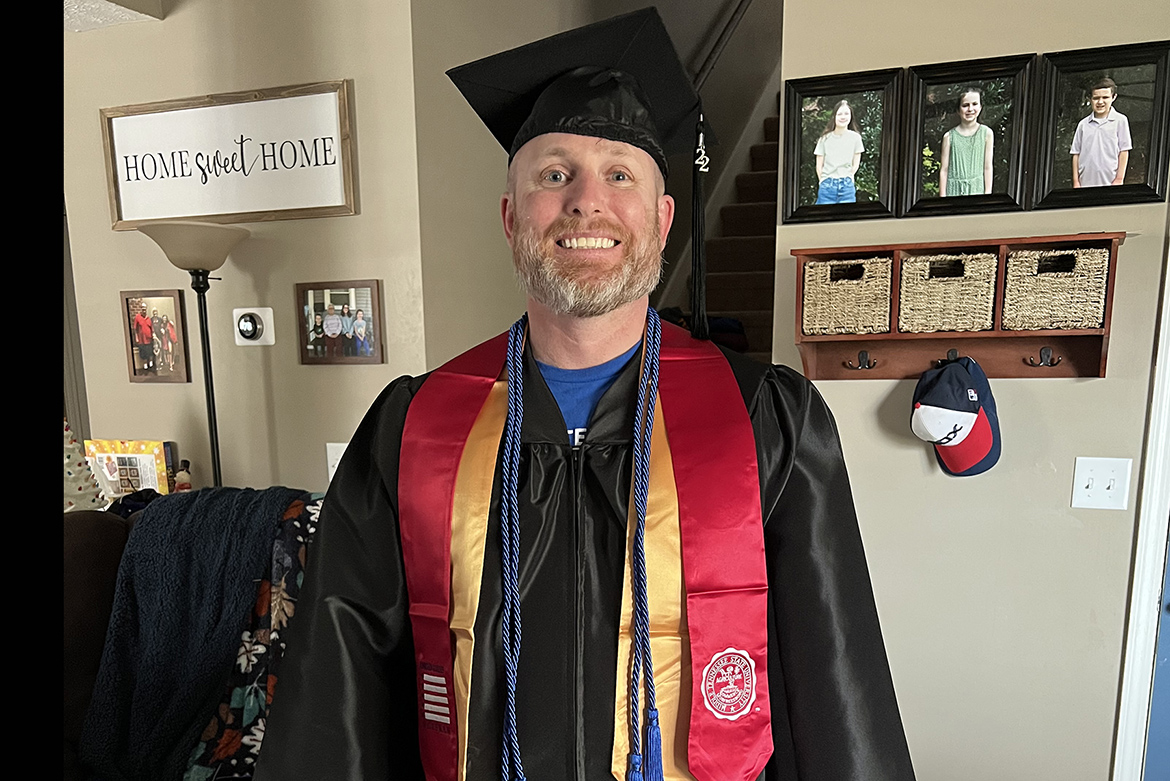 Mark Musselman graduated from Middle Tennessee State University in May with a 4.0 GPA to earn his bachelor’s degree in professional studies. He says he did it for his kids to show them that you can “rebound” from anything if you work hard enough — even if you’re doing it at 41 years old.

“I had an F on my high school transcript,” said Musselman, who lives in Murfreesboro, Tennessee. “To be able to top off my college career with a 4.0 meant a lot to me.”

In 2005, five years after he had graduated high school, Musselman joined the Marine Corps. He said it was the best decision he could have made at the time because he was not living a fulfilling life up to that point. He had made mistakes, gotten in trouble, and knew it was time to change.

“I rebounded big time when I left for boot camp,” Musselman said. “I don’t forget my experiences, but I forgive them and recognize them moving forward and try to assist others so they don’t fall into the same pitfalls that I’ve experienced.”

He spent 10 years in the service before he was medically retired. In his late 30s, he decided to put his improved work ethic, his communication strategies, and of course his GI Bill to “good use” and earn his bachelor’s degree.

The decision to choose MTSU was one that Musselman took very seriously, he said. “I was so picky about what university I wanted to be a part of.”

He initially learned about MTSU during his job as a mail carrier. He was driving around delivering the mail and saw the billboards announcing MTSU’s inclusion in the Princeton Review, a designation the university has achieved for three years in a row. That’s when he started to do more homework about the university.

“I wanted to be somewhere I could fulfill my potential, and the more I read about MTSU the more I fell in love with it,” he said.

Using Prior Learning Assessment, Musselman was able to leverage one of the biggest advantages MTSU can give to its adult students who are finishing their degrees.

Often referred to as PLA, the University College program allows adult students to convert eligible prior work and training, and certifications into college credit and use up to 60 credits toward electives. Students do all of this for the cost and time of a three-credit-hour course. Musselman walked away with 52 credits.

“I had no idea at the time that the stuff I learned in the military would transfer to college credits, but I am so thankful they did,” he said. “I knew MTSU was veteran-friendly, but this is even more than I expected.”

Since he liked working with numbers and analyzing data, he landed on the professional studies major with a concentration in information systems, a flexible option that MTSU recommends to adult students who have lots of prior experience in many different fields.

Even though he graduated with a perfect GPA, the classes were challenging, Musselman said. He was happy with the difficult task, saying that the military had always tested him — and he knew how to handle it.

“I needed to be pushed beyond the realm of my comfort zone,” he said. “There were so many times that I just wanted to throw all the paperwork in the air and say, ‘You know what, I’ll just deliver mail the rest of my life.’ But I had to remind myself that even getting to that point was not a layup.”

He said he is thankful that he went through MTSU and can now hopefully recommend it as a top choice to his children and specifically his daughter who is in the process of looking at colleges.

Musselman said his entire family not only helped motivate him on the way to his degree but also supported him when he needed it most. In addition to his teenage daughter, he also has an 8- and 10-year-old who attend Scales Elementary.

“I believe my wife and I served as an inspiration to our kids,” Musselman said, noting that his wife, Alicia, was also finishing up her degree. “Maybe by the time the older ones are in high school, we can both go get our master’s degrees and all four of us will grind it out together.”

Musselman said that MTSU has helped develop him into a better person and inspired him to hopefully become a leader that can use his past to show others that anything is possible.

“Good judgment comes from experience and experience comes from bad judgment,” he said. “This experience has made me look forward to doing promising things not just for myself, but for everyone around me.”

Anyone interested in earning a bachelor’s degree, MTSU has several flexible options for working adults. Visit mtsu.edu/finishnow for more information.