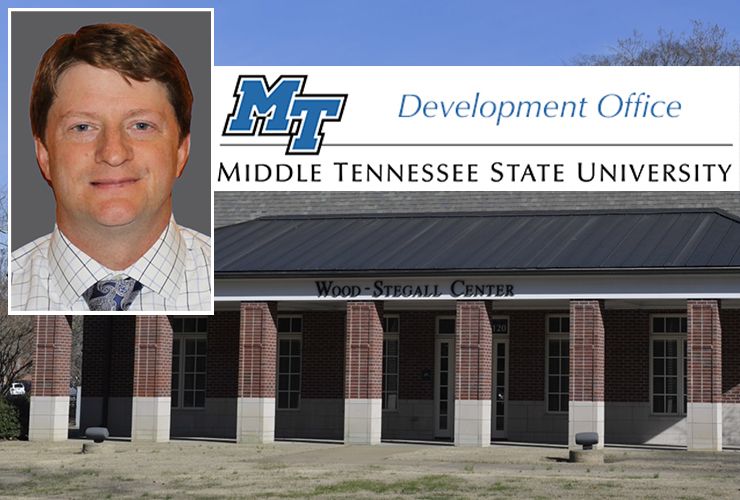 A West Tennessee native who most recently worked at the University of Tennessee, Knoxville, Clark supervises the university’s constituent-based development officers in his new role, each serving an academic college, as well as the annual giving and stewardship team.

MTSU Vice President for Advancement Joe Bales, who has transformed the MTSU Foundation over the last 20 years, said he is eager to see how Clark can help continue its natural evolution.

“We’re excited to have Mark here. He brings great experience from several universities, is very familiar with our state, and has a genuine desire to build strong relationships with everyone he meets,” said Bales. “Those are all keys to success in fundraising here.”

Clark, who officially started his role at the beginning of the fall semester, has been impressed by what he has seen at MTSU and feels the future is even brighter.

“I’ve met so many incredible people who are passionate about MTSU and investing at every level to make it even better,” he said. “The faculty, staff, deans, alums and donors have all been very welcoming. The future is bright and I’m looking forward to doing all I can to make it brighter.”

Clark comes to the Blue Raider campus with more than 20 years of fundraising experience in higher education. He said one of his key goals is for “more people to feel more connected to our university.”

“I want us to actively invite people back, show them how much our university has improved in recent years, and present them with a vision for how much better it can be with their involvement and investments,” he added. “Everyone associated with MTSU should feel a sense of ownership in our university and a sense of responsibility for its future.”

Clark noted the foundation is solid, citing the strong economic base in this region and several contributions he has seen in his short time here, including the fact that more than 30% of December graduates made a contribution through the Senior Gift program, an initiative that encourages graduates to give back to their alma mater, regardless of gift size.

“Joe Bales has done an amazing job building our Development operation, but it’s still relatively young. Senior Gift and True Blue Give (three-day fundraising drive in the spring) are both less than 10 years old,” Clark said. “With each year that passes and every contribution that is made, we have an opportunity to build a stronger philanthropic culture, elevate our people and programs, and ultimately continue the transformation of our university.”

Clark can be reached at mark.clark@mtsu.edu or 615-904-8409. Those wishing to contribute to MTSU can learn more at the Development Office website at https://www.mtsu.edu/development/.