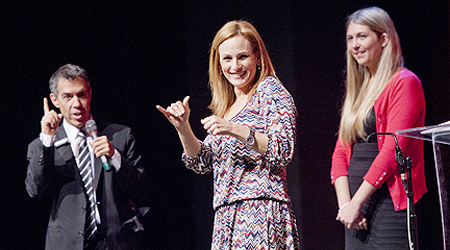 Author-actress Marlee Matlin’s hands must have been exhausted from all the signing she did at MTSU March 22—and not just because of the 250-plus books she personalized for appreciative fans for more than 90 minutes after her exuberant hourlong lecture.

“All of us have a unique gift to share, and none of us should let anything get in the way of our dreams,” she told more than 600 people in MTSU’s Tucker Theatre in her keynote address for the University’s observation of National Women’s History Month.

“Silence is the last thing the world will ever hear from me.”

The dynamic Oscar-winner captivated the crowd from her first moments on the theatre’s newly renovated stage, prompting laughter and applause when she stepped onto a small box behind the podium.

“I feel … veeeeery tall,” Matlin wisecracked in sign language, prompting a grin from longtime interpreter and business partner Jack Jason as he spoke her words aloud for the hearing members of the audience. “I don’t think I need this box.”

She stepped down, looked around and said, “Now I feel short. And I don’t need this [pushing the microphone away]. That’s what I pay Jack for.”

Her first words set the tone for her entire talk, as she joked about people’s reactions to her deafness in one breath and in the next offered bracingly encouraging advice for anyone facing a challenge.

She discussed her parents’ determination to encourage and support her and their persistence in treating her just like her siblings. Their allowing her to be involved with a local theater program gave her confidence and pride and led to a chance meeting with actor Henry Winkler.

He became a friend and mentor, in part because of his and his son’s own battles with dyslexia, Matlin said, “and 8½ years later, after that first meeting, I was standing on a stage with an Academy Award in my hand.”

Marlee Matlin dances with MTSU alumnus Kyle Clifton during an extended book-signing session in Tucker Theatre after her March 22 lecture. Matlin and Clifton joked about her 2008 appearance on "Dancing with the Stars."

Since “Hollywood is just like high school, except with more money,” Matlin said, she became determined to find her way around the barriers that the entertainment industry threw in her way after her shooting-star debut.

She recalled an incident with a producer who visited the set of her first TV series, “Reasonable Doubts,” and praised her work, then asked, “Is she gonna be deaf for the whole show?”

Matlin’s brief gesture—making the sign for “loser” on her forehead—prompted a wave of laughter across the MTSU theatre. It also was the only sign that Jason, smiling, didn’t have to translate.

“I use these examples not to trivialize the situation, but to explain a little, because people are being discriminated against every day simply because they’re different,” Matlin said after citing more awkward incidents with flight attendants, restaurant servers and even fellow celebrities during her multi-million-dollar fundraising 2011 turn on “The Celebrity Apprentice” reality show.

“I think, in incidents like that, it’s best to say what my parents always told us: We all deserve respect, and we all deserve to be heard.”

The youngest winner of an Academy Award as best actress for her debut in “Children of a Lesser God,” Matlin has expanded her film and TV roles into a career as producer, best-selling author and volunteer advocate.

Her latest project is a new iPhone app, “Marlee Signs,” which teaches the basics of American Sign Language and will be available later this year.

Matlin even noted how impressed she is with MTSU’s “True Blue” nonviolence pledge that encourages honesty, integrity and respect for diversity, calling the audience members “truly heroes” for their presence and support.

“Now you know sign language,” she said after guiding the audience through signs for “courage,” “dreams” and “success.”

“Courage plus dreams always equals success. That equation should be taught in every institution of learning.”