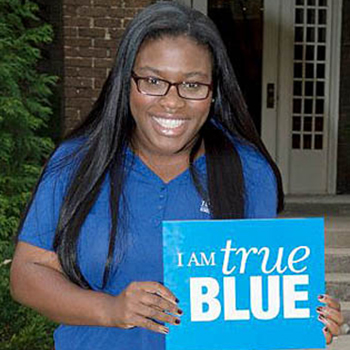 An MTSU student is preparing to spend a year in northern Africa after winning a major American scholarship.

Tandra Martin, an international relations major from Murfreesboro, who will be participating in the MTSU-approved Morocco program, has received a David L. Boren Scholarship sponsored by the National Security Education Program.

Boren awards provide U.S. undergraduate and graduate students “with resources and encouragement to acquire language skills and experience in countries critical to the future security and stability of our nation,” according to www.borenawards.org.

MTSU Office of Education Abroad administers the application process and nomination. Education Abroad offers more than 400 program options in 65 different countries and a variety of financial aid plans to help students take advantage of those programs.

In fact, the number of MTSU students studying abroad has been on the rise for the past three academic years for which data are available. Nearly 400 students took advantage of these opportunities in the 2012-13 academic year, an all-time high since the office opened in 2002.

The Institute of International Education, an independent not-for-profit international education and exchange organization, administers the Boren awards. This year, only 165 Boren scholarships were granted from 868 applications.

Martin’s stipend will cover tuition, room, board and some travel expenses as she studies the Arabic language at Moulay Ismail University in Meknes, Morocco.

“The academic year of study in Morocco and my internship with a women’s rights association will allow me the opportunity to see firsthand the reforms taking place in Morocco and also gauge the implications the changes have for the rest of the Arab world,” Martin said.

Some of the classes Martin will take in Morocco will focus on Islamic society and politics and Morocco’s place in international relations.

“Upon graduation, I intend to pursue a master’s degree that merges public policy, international affairs and communications,” Martin said.

“My intended path of study will put me in a position to better understand the global information environment and how that translates to governance and security.”

Martin recently completed an internship with the Center for Strategic and International Studies in Washington, D.C. She recorded podcasts, photographed events, ran television studio cameras and updated multimedia on the center’s website.

Dr. Karen Petersen, associate dean of the MTSU College of Liberal Arts and an associate professor of political science, taught Martin in three courses and supervised her participation in the university’s Model United Nations team.

“She cares deeply about the needs of community residents who are disadvantaged socioeconomically and demonstrates that concern in tangible ways.”

While continuing her MTSU education and her internship, Martin also was involved with Alpha Delta Pi sorority, Student Ambassadors and the University Honors College.

“I live by my planner and have to remain organized in order to meet all my commitments,” Martin said.

For more information about the Boren scholarships or other financial opportunities to facilitate studying in other countries, contact Tiffany Bickers, director of MTSU’s Office of Education Abroad at 615-904-8117 or mtabroad@mtsu.edu.

People walk past the Bab Mansour gate in Meknes, Morocco, completed in the early 18th century. The city’s largest gate, it now serves as an arts and crafts gallery. (Photo from Wikimedia Commons)