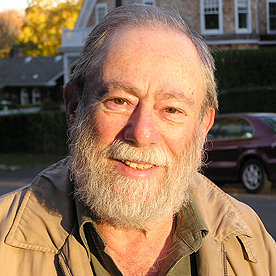 Marvin Bell, Iowa’s first poet laureate and the author of more than 16 volumes of poetry, will make a special visit to MTSU for a poetry reading on Monday, Feb. 20.

The free public event is scheduled for 4:30 p.m. in Cantrell Hall inside the University’s Tom Jackson Building.

Bell, who has been called “an insider who thinks like an outsider” with writing that is “ambitious without pretension,” was the Flannery O’Connor Professor of Letters at the University of Iowa’s Writers’ Workshop for 40 years and is now a faculty member emeritus there. He was named as Iowa’s poet laureate in 2000 and served two terms in that role.

He has collaborated with composers, musicians and dancers and is the originator of a poetic form known as the “Dead Man” poem. Three new Bell books appeared in 2011: Vertigo: The Living Dead Man Poems, from Copper Canyon Press; Whiteout, a collaboration with the photographer Nathan Lyons, from Lodima Press; and a children’s picture book from Candlewick Press illustrated by Chris Raschka and based on the poem “A Primer about the Flag.”

A CD is forthcoming of a song cycle, “The Animals,” commissioned by the composer, David Gompper, which premiered in 2009.

Bell has edited for The North American Review, The Iowa Review and Lost Horse Press and also taught for Goddard College and the Universities of Hawaii and Washington. For five years, he designed and led a summer workshop for teachers from the urban after-school program America SCORES.

Bell, who lives in Iowa City, Iowa, and Port Townsend, Wash., is the father of musician Nathan Bell. The younger Bell is spending a week in residence at MTSU to share his songwriting talents with students at the Visiting Artist’s Seminar, culminating in a free public concert on Friday, Feb. 24, in the University’s Tucker Theatre.