In the News: Fermentation scie..

MTSU’s BERC partnering with US.. 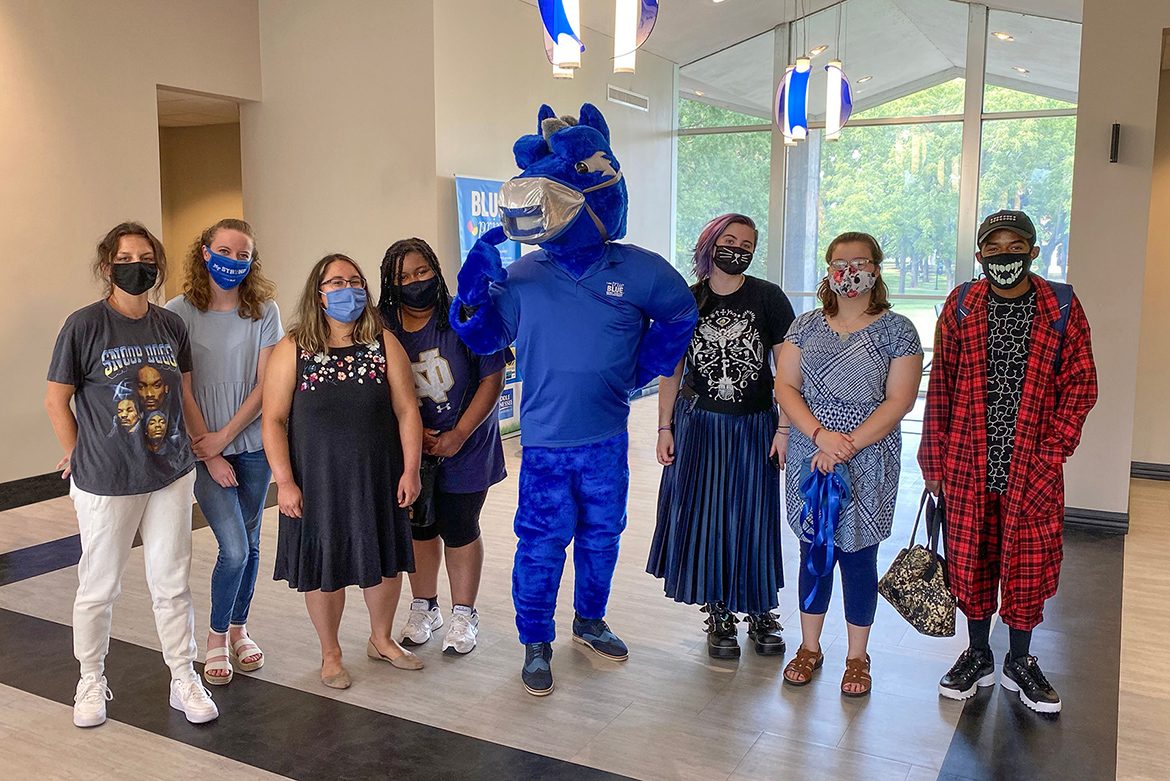 Masked Lightning, a symbol of MTSU’s pandemic precautions on campus, will be grand marshal of the 2020 virtual Homecoming Parade, which will be broadcast live Saturday.

The traditional parade format, which was set aside due to COVID-19 concerns, will instead be a “MTShUbox” parade, featuring more than 50 shoebox floats created and decorated by students, alumni and university colleges and offices.

Chip Walters, voice of the Blue Raiders, and 2020 Distinguished Alumni Award recipient and recording artist Pat Duke will anchor the broadcast, which will include live interviews, a special Band of Blue performance and this year’s Homecoming Court. 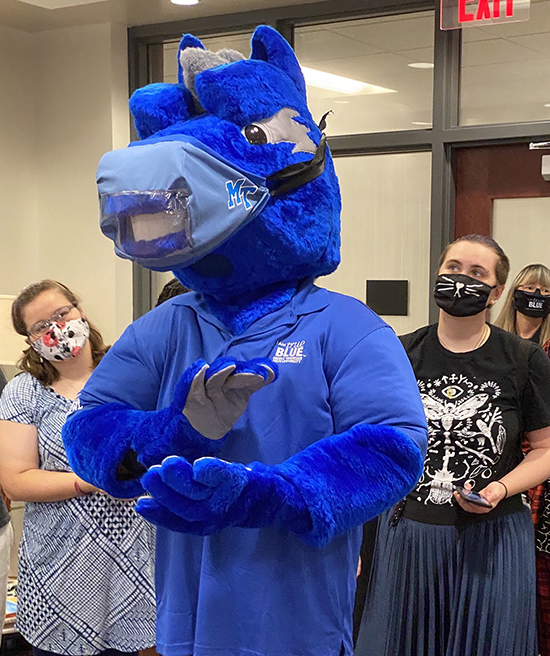 Students from the College of Behavioral and Health Sciences design team for Lightning’s masks fit one of their creations on the mascot. (MTSU photo by David Foster)

“My thanks to the MTSU Alumni Association and True Blue TV for creating a way for the spirit of this grand homecoming tradition to continue in these trying times,” said MTSU President Sidney A. McPhee.

To prepare Lightning for his grand marshal role, apparel design students from MTSU’s College of Behavioral and Health Sciences were asked by McPhee to design a set of face masks for the university’s mascot to reflect the campus policy of wearing masks as a COVID-19 deterrent.

The students “had to collect the ideas, decide on a design direction and implement the design — all within a relatively short period of time,” said associate professor Frederick Cottle, who mentored the team.

“Lightning was a rather large subject, but the classroom knowledge of our students was easily applied to this real-world opportunity,” Cottle said. “It allowed students to understand the importance of the MTSU brand and help enhance it by making Lightning COVID-19 compliant.”

Lightning appears on MTSU’s COVID-19 caution and directional signage across campus. But it was the work by Cottle’s class that inspired McPhee to make the masked mascot this year’s parade grand marshal.

“They answered our call and did a terrific job,” the president said of the student team.

You can tune in to True Blue TV on Comcast Xfinity channels 9 and 1096 and channel 9.1 on the MTSU’s campus cable system. It is also available on Roku and Apple TV; airs as channel 195 on DTC in Alexandria; digital channel 206 on United Communications in Chapel Hill; and as channel 99 on AT&T U-verse in Middle Tennessee.

Go to mtsu.edu/truebluetv for more information about the channel’s viewing options.

Parade co-anchor Duke (Class of 1981, College of Liberal Arts) began a recording career at age 13. On campus, he performed in theatrical productions, was the student leader of The Blues Crusade, MTSU’s Big Band, and formed a legendary musical group, Contraband.

He has sung on more than 10,000 national commercials and has voiced seven Super Bowl spots, one earning the prestigious Promax BDA Award for best voice-over. He has been a narrator for “Swamp People” for 12 years, and has been the voice of Kellogg’s Krave cereal, Miller Lite and Coors, Kentucky Fried Chicken, NAPA Auto Parts and Kool-Aid Man.

The virtual parade will lead up to the 4 p.m. Saturday, Oct. 3, Homecoming Game against Conference USA rival Western Kentucky University in Floyd Stadium. 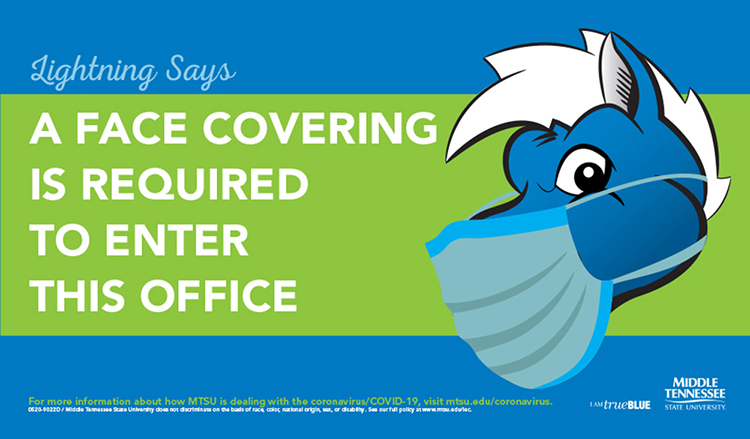 This is an example of the COVID-19 prevention signs featuring a masked Lightning mascot that can be found throughout campus. (Courtesy of MTSU Creative Marketing Solutions) 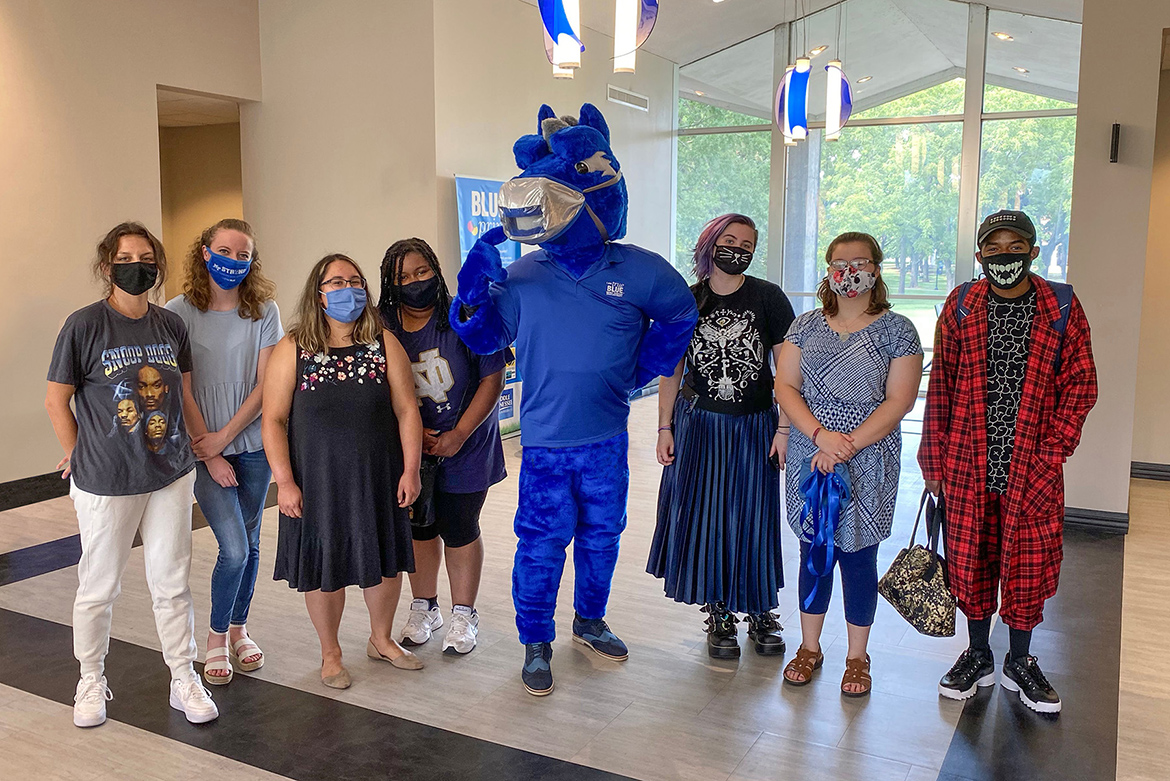