September 'Out of the Blue' ta.. 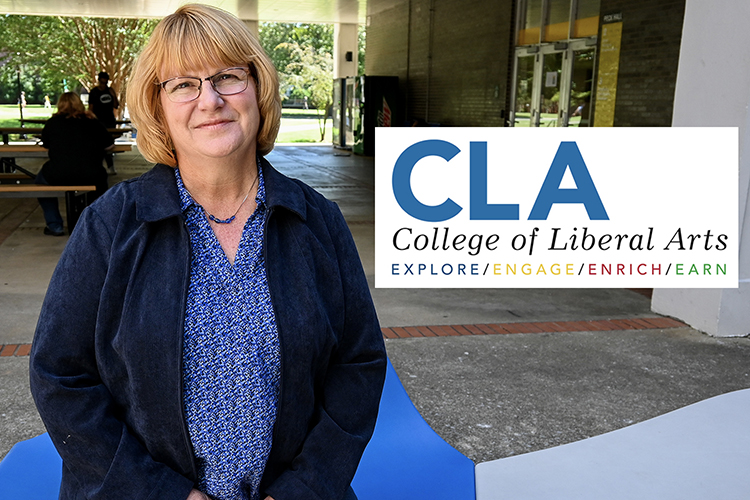 Let’s just say MTSU’s Janet McCormick is fond of directing the Master of Arts in Liberal Arts, or “MALA,” graduate program, a flexible advanced degree that provides students greater liberty in crafting a program of study catered to their unique interests.

“I love it,” McCormick said. “It’s unique because it’s an interdisciplinary program. It can be adapted to student and employer needs, to a variety of personal and professional goals grounded in the liberal arts…. And we’ve had several alumni find success across different industries or advanced degree programs with the knowledge and experience they’ve gained in our program.”

Launched in fall 2015, students work with faculty from multiple departments within the College of Liberal Arts, or CLA, to complete their courses.

Students work with faculty from the Departments of Art and Design; Communication Studies; English; Global Studies and Human Geography; History; Philosophy and Religious Studies; Political Science and International Relations; Sociology and Anthropology; Theatre and Dance; and World Languages, Literatures and Cultures, plus the School of Music, McCormick said.

Out of the 30 semester hours required to complete the degree, students have 12 elective course hours to map out from across these departments according to their specific needs. That’s followed by an individually tailored thesis or capstone project, making the program customizable for several different career paths.

McCormick added that the program, in 2020, became the first graduate degree plan at MTSU to earn the Experiential Learning designation, followed by its MT Engage affiliation in 2021.

“This means a number of our graduate courses incorporate hands-on learning and networking opportunities in their fields of study and help students reflect on their new knowledge and develop an electronic portfolio to showcase it along with their newly gain skills and abilities,” she said.

Raised in Pennsylvania and with her degrees earned in Illinois, McCormick joined MTSU in 2002 to work on the university’s expansion of an interdisciplinary organizational communication undergraduate major.

“I jumped at the chance to be involved!” McCormick recalled. “With a background in interpersonal and organizational communication and having lived and taught abroad for seven years in London, Buenos Aires and Singapore, I brought a global perspective to incorporating effective communication skills in organizational life.”

McCormick has served as director of the MALA grad program since summer 2019.

Julie Baker graduated from MTSU’s MALA program in spring 2021 and said it helped her earn her current position as the enrollment coordinator at MT One Stop on campus, where she assists students with their enrollment needs.

“I believe the communication skills and techniques I learned during my time as a MALA student are useful in communicating with students on a daily basis, either in person, via Zoom, through email and on the phone,” Baker said.

Baker highlighted the variety of courses she completed in the program and said the program could be a good fit for just about anyone because it can be so closely tailored to the student’s interests and goals.

“We studied music, dance, art history, philosophy and communication, along with many other things,” she said. “I took courses about Hollywood and the movies, detective fiction and crime and media. It was very enjoyable to discover new interests and learn more about topics I was already interested in…. Dr. McCormick works extremely hard to put together classes of interest to students but also ones that they will learn and benefit from.”

“Dr. McCormick is amazing to work with,” she said. “Customer service is a big part of my job, and I believe that Dr. McCormick was especially helpful to me, personally, with that. She was always so supportive and encouraging and pushed me, in a good way, to work harder and do more than I had ever done before.”

McCormick said she receives messages of appreciation for the program from successful graduates, such as Baker, often.

“Recently, an alumna shared with me that the program opened the door to her current position as an art teacher,” McCormick said. “Another presented research from her MALA thesis at a political ecology conference.”

To learn more about the MALA graduate program, McCormick suggested contacting her directly at Janet.McCormick@mtsu.edu or visiting https://mtsu.edu/programs/liberal-arts-ma.