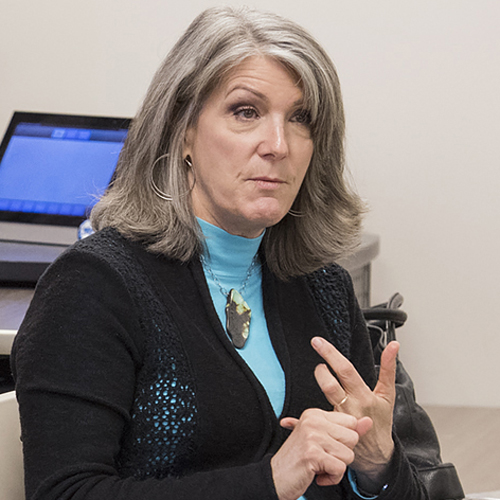 “I’ve been a fan of country music since I was a young girl, and I’d come in the house and I’d hear my Nana playing records on the record machine, and she’d play Kathy Mattea,” said Wolkonowski, who’s majoring in recording industry management in the College of Media and Entertainment.

“I’ve always looked up to (Mattea), so when I walked in, I couldn’t believe it was her. She was super nice, super grounded … I guess she is something I’d want to be when I grow up, because I’m wanting to be in country music.”

Wolkonowski was among the 20 or so students in MTSU professor Kris McCusker’s popular music studies class, “American Music in the Modern Age,” who were treated to more than an hour of insights and wisdom from the Nashville singer-songwriter earlier this semester.

McCusker, a professionally trained ethnomusicologist and historian, said her MTSU Department of History course looks at how historical events have shaped music, such as producing certain kinds of “sounds” and/or musicians.

“What we do is see the ways that history produces music, how music is the outcome of political, cultural and social changes at various points in the past,” she said.

Mattea’s visit stemmed from an interview she did with a graduate student last spring. McCusker assisted the student with the phone interview, which was done from MTSU’s Center for Popular Music in the Bragg Media and Entertainment Building, and an invitation was extended, which Mattea graciously accepted.

Dr. Greg Reish, director of the Center for Popular Music, assisted McCusker with the logistics to bring Mattea to campus.

“She’s a real educator at heart,” said McCusker, who noted that her class was studying music the 1980s and 90s, a period when Mattea was hitting it big on the country music charts. Mattea rose to prominence in the 1980s with hits such as “Eighteen Wheels and a Dozen Roses,” “Goin’ Gone” and “Love at the Five and Dime.”

Mattea’s been nominated for multiple Grammys and other industry awards. She won the 1991 best country vocal performance Grammy for her classic “Where’ve You Been” and the 1994
best Southern, country or bluegrass gospel album for “Good News,” which includes the Christmas standard “Mary Did You Know?”

Here’s a short video of McCusker discussing the visit and a few clips of Mattea performing “Seeds” for the class:

Mattea shared with students how she got started in her music career and also discussed her social activism around issues such as HIV/AIDS and the environment. Mattea’s AIDS activism was sparked by friends who died from AIDS, but “nobody was talking about it,” McCusker said.

A native of West Virginia coal country, Mattea would later turn her attention to the environment.

In the wake of a bitterly divisive presidential election, Mattea discussed with students “the beginnings of the ways she started seeing music differently, from simply being an entertainment medium, to a medium that builds relationships among people, that crosses political barriers around certain environmental and social issues,” McCusker said.

Wolkonowski, who performs under the name “Hunter Girl“ a few times each week at various venues in Nashville, said she was inspired by Mattea’s socially conscious perspective.

“I really liked how she had the ability to write songs that pertain to what’s going on in the world right now,” she said.

“All of her songs have a story … she really puts social and economic things that are going on in our life today and puts them into words for people who can’t really speak up about things.”

McCusker said Mattea plans to return to MTSU in the spring to work with Reish in the Center for Popular Music.

For more information about the MTSU Department of History, visit www.mtsu.edu/history.

For more information about the Center for Popular Music, visit www.mtsu.edu/popmusic.