Music pioneer Peer is lecture topic at Center for ... 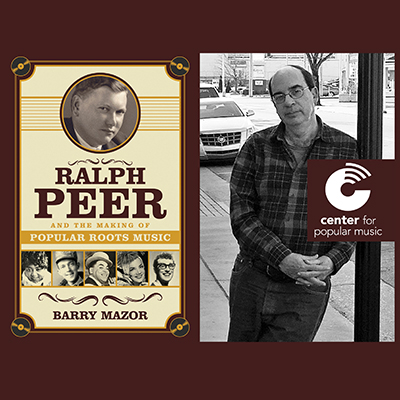 Music journalist Barry Mazor will focus on Ralph Peer’s pioneering role in bringing the recording, marketing and publishing of blues, jazz, country, gospel and Latin music to the world in a special Monday, Jan. 26, lecture at MTSU’s Center for Popular Music.

The free public discussion is set for 4:30 p.m. in Room 160 of the College of Education Building on the MTSU campus. A searchable campus map of MTSU, complete with parking details, is available at http://tinyurl.com/MTSUParking14-15.

Mazor’s newest book, “Ralph Peer and the Making of Popular Roots Music,” is the first biography of the adventurous A&R man for Victor Records who discovered Jimmie Rodgers and the Carter Family at the famed “Bristol sessions” in East Tennessee in 1927.

He helped bring Latin American music to the forefront during World War II and revolutionized popular music in the postwar era by pushing regional music to the nation and publishing million-sellers recorded by artists ranging from Bing Crosby to Buddy Holly.

Mazor, who also is the author of “Meeting Jimmie Rodgers: How America’s Original Roots Music Hero Changed the Pop Sounds of a Century,” is a longtime music, media and business journalist.

He has written for the Wall Street Journal and No Depression magazine, and his writing also has appeared in the Oxford American, The Washington Post, the Village Voice, Nashville Scene, American Songwriter and the Journal of Country Music.

American roots music is a specialty of MTSU’s Center for Popular Music, which was established in 1985 by the Tennessee Board of Regents as one of 16 Centers of Excellence across the TBR system. It’s devoted to the study and scholarship of popular music in America, and its staff maintains a unique archive of research materials that spans shaped-note songbooks to hip-hop mash-ups in a collection stretching from the early 18th century to the present.

The Center for Popular Music also develops and sponsors programs in American vernacular music and regularly presents special concerts, lectures and events for the campus community.

For more information on the Jan. 26 lecture at MTSU, email the Center for Popular Music at popular.music@mtsu.edu.