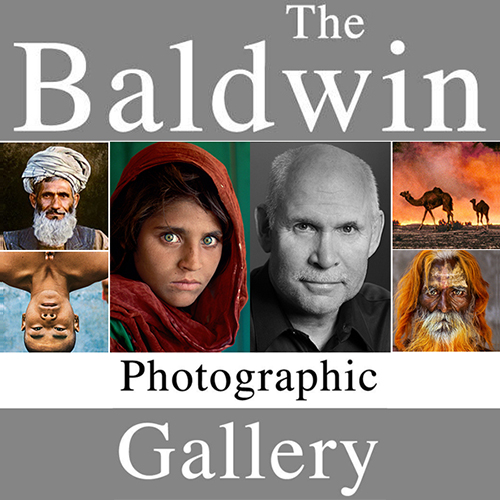 The collection of photographs focuses chiefly on the people McCurry has met while chronicling his three-plus decades of world travel. The Pennsylvania native worked for a local newspaper for two years after his 1974 graduation from Penn State University, then left to travel and freelance in India.

He wound up crossing into Afghanistan with some refugees just before the Russian invasion in 1979, disguising himself and traveling for weeks with the Mujahedeen before emerging with the first images of that conflict.

McCurry is best known for his photo “Afghan Girl,” a stark 1984 portrait of a teenage refugee that made the cover of National Geographic in 1985 and led to a nearly 18-year, and ultimately successful, search for her identity. The magazine called “Afghan Girl” “the most recognized photograph” in its history.

“Afghan Girl,” Steve McCurry’s best-known photo, depicts an teenaged Afghan refugee from the Russian invasion living at the Nasir Bagh refugee camp in Pakistan in 1984. The young woman, who survived her experience and was able to return home, was identified almost 18 years later as Sharbat Gula. This photo and more of McCurry’s work are in a new exhibit at MTSU’s Baldwin Gallery through Oct. 20. (photo submitted)

MTSU’s Baldwin Photographic Gallery is located in Room 269 on the second floor of the Bragg Media and Entertainment Building. A searchable, printable campus parking map is available at http://tinyurl.com/MTSUParkingMap.

Off-campus guests visiting the Baldwin Gallery should obtain a special one-day permit from MTSU’s Office of Parking and Transportation at www.mtsu.edu/parking/visit.php.

McCurry, who’s also covered conflicts in Beirut, Cambodia, the Philippines, the Persian Gulf, the former Yugoslavia, and Tibet, is the recipient of numerous awards, including the National Press Photographers Association’s Magazine Photographer of the Year, the Robert Capa Gold Medal and an unprecedented four first-prize honors from the World Press Photo contest. The Minister of French Culture also appointed McCurry a Knight of the Order of Arts and Letters, and the Royal Photographic Society in London recently presented McCurry with its Centenary Medal for Lifetime Achievement.

McCurry’s books include “The Imperial Way,” “Monsoon,” “Portraits,” “South Southeast,” “Sanctuary,” “The Path to Buddha: A Tibetan Pilgrimage,” “Steve McCurry,” “Looking East,” “In the Shadow of Mountains,” “The Unguarded Moment,” “The Iconic Photographs” and “Untold: The Stories Behind the Photographs.”

He also founded ImagineAsia, a nonprofit organization, in 2004 that works with local leaders and regional nongovernmental organizations to provide educational resources and opportunities for children and young adults in Afghanistan. You can learn more about his work at his website, http://stevemccurry.com.

MTSU’s Baldwin Photographic Gallery, part of the university’s College of Media and Entertainment, is open from 8:30 a.m. to 4 p.m. Monday through Friday and closed on weekends and state and university holidays.

Special Baldwin Gallery tours at MTSU can be arranged by contacting gallery curator Tom Jimison, a professor in MTSU’s Department of Electronic Media Communication, at 615-898-2085 or tom.jimison@mtsu.edu.

This Afghan street photographer displaying his art and his camera is the subject of visual storyteller’s Steve McCurry’s lens and part of a new exhibit at MTSU’s Baldwin Gallery through Oct. 20. (photo submitted)

Camels search for untainted shrubs and water in the burning Ahmadi Oil Fields of southern Kuwait in this 1991 Gulf War photo by Steve McCurry. McCurry’s work is in a new exhibit at MTSU’s Baldwin Gallery through Oct. 20. (photo submitted)

Photographer Steve McCurry captured a moment in these Shaolin monks’ day during a visit to Zhengzhou, China, in 2004. McCurry’s work is in a new exhibit at MTSU’s Baldwin Gallery through Oct. 20. (photo submitted)

Tribu Rabari poses calmly for a 2010 portrait in Rajasthan, India, by photographer Steve McCurry. McCurry’s work is in a new exhibit at MTSU’s Baldwin Gallery through Oct. 20. (photo submitted)