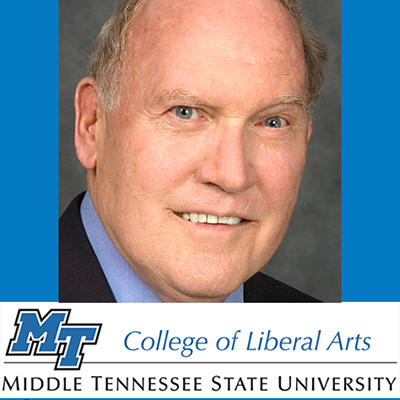 MTSU is paying tribute to one of its most influential professors and administrators by unveiling a plaque in his honor.

Dr. John McDaniel, who served as dean of the College of Liberal Arts for a quarter-century, was the focus of the April 15 ceremony in the James Union Building.

The Shakespearean scholar came to MTSU in 1970 as an assistant professor of English and went on to become chair of the Department of English before being named dean in 1985. He died in 2010.

“He was renowned for his wisdom, wit and ability to deal with all kinds of people,” said Dr. Mark Byrnes, McDaniel’s successor as liberal arts dean.

McDaniel influenced thousands of students and hundreds of faculty during his MTSU years. Two of his relatives continue his legacy by contributing their expertise to academia at MTSU.

“He was a teacher first,” said Dr. Scott McDaniel, the dean’s son and a math professor in the Department of University Studies. “In fact, when he was dean, he would teach a Shakespeare class pro bono (free).”

Scott McDaniel remembered his father as the kind of dad who would lead by example rather than trying to direct his son’s appreciation of a school subject.

“He would get you to think about it on your own so that he wouldn’t write the paper for you, but he would … have a conversation and bounce off you something in Shakespeare to something you could relate to in another area,” said Scott. “He wasn’t calculated at all. It was very organic.”

Dr. Robb McDaniel, the dean’s nephew and a professor of political science, said his uncle was a “player’s coach, not a manager’s coach,” a sports metaphor that describes the dean’s ability to deal with faculty and administrators.

“He, as dean, tried to stay out of people’s business,” said Robb McDaniel. “That was one of his guiding principles: You hire good people and let them do their jobs.”

Robb McDaniel said the senior McDaniel’s humor could be biting, but not cruel. He recalled a time when a fellow dean who no longer works at MTSU referred to his own college as “diamond mining” and said all the other colleges were “coal mining.” McDaniel addressed the impolitic remark by passing out coal miners’ hats at the next deans’ meeting.

“He learned how to navigate craziness to the point where nothing seemed to surprise him,” said Robb McDaniel, “and so, because of that, he was able to handle a lot of the craziness that deans have to handle with a degree of humorous detachment.”

John McDaniel died May 3, 2010, “too soon and much to his chagrin,” according to his self-penned obituary. The plaque honoring his contributions to MTSU will be placed permanently outside the graduate study room/classroom on the third floor of Peck Hall.

For more information, contact Connie Huddleston, events coordinator for the College of Liberal Arts, at 615-494-7628 or connie.huddleston@mtsu.edu.