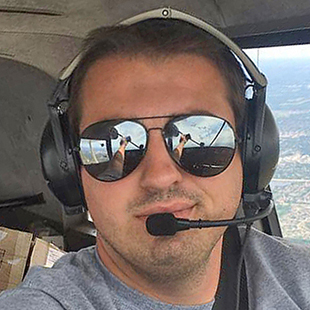 He has flown a family-owned, four-seat airplane 6,600 miles. He has touched and been touched by the past, present and future of aviation.

He toured aviation museums around the country. He spent time at the Grand Canyon and other U.S. landmarks. He wrote a blog, conducted research for an Honors College thesis and promoted aviation to young people and adults.

And someday, when he has children and grandchildren, the young man who admits to becoming a storyteller on his nearly monthlong voyage will have volumes of stories about retracing the flight path of aviation pioneer Cal Rodgers in flying from Long Island, New York, to Long Beach, California,

On June 16, the Carthage, Tennessee, native arrived back home at Murfreesboro Airport to the welcome form his family and from MTSU students, faculty and staff from the university’s Department of Aerospace and the Honors College.

MTSU senior aerospace major Collin McDonald displays a “Welcome Back Vin Fiz 2” cake given to him by Dr. John Vile and the University Honors College June 16 at Murfreesboro Airport. McDonald successfully completed the coast-to-coast trip for an honors thesis and to promote aviation among young people.

Holding an MTSU “I am True Blue” sign after arriving at the Long Beach, Calif., Airport June 11, senior Collin McDonald of Carthage, Tenn., stands in front of “Molly,” the four-seat Maule MX-7-160 airplane he flew 4,300 miles across the country in the 1991 flight path of aviation pioneer Cal Rodgers in 1911. McDonald accomplished this for an Honors College thesis project and to promote aviation to young people and adults at the 75 stops along the way. (Photo by Lorrie McDonald/vinfizflight.wordpress.com)

“The desire accomplished is sweet to the soul,” Collin McDonald wrote in his blog in summing up the experience. “It truly has been a remarkable adventure and it isn’t over yet.

“All things considered, I have been blessed with safe flights the entire way and the chance to represent the Honors College and Aerospace Department in such a national way,” he added. “I have plenty of stories … and look forward to being home again.”

Collin McDonald has a 4.0 GPA in aerospace maintenance management and is an Honors College Buchanan scholarship recipient.

After graduating from MTSU, he plans to become a missionary pilot. For more on his journey, visit https://vinfizflight.wordpress.com.

MTSU senior Collin McDonald, left, and his mother, Lorrie McDonald, both from Carthage, Tenn., hold a sign she and her husband, David McDonald, had made to congratulate their son for accomplishing his goal to fly coast to coast for an Honors College thesis project. Flying a plane nicknamed “Molly,” Collin McDonald landed at the Long Beach, Calif., Airport June 11. (Photo submitted)

As MTSU senior Collin McDonald approaches the halfway point in his transcontinental Vin Fiz 2 quest, his attempt to retrace the flight path that aviation pioneer Cal Rodgers achieved in 1911 in his plane called The Vin Fiz has already allowed him to:

With the horizon in view, Collin McDonald soars above the Oklahoma landscape on a great day for flying. Stormy weather in the Great Plains and other parts of the country has slowed his progress. He sports an MTSU NASA FOCUS Lab T-shirt. The lab recreates pilot-control tower situations and communication with air traffic control personnel. (Photo from www.facebook/vinfizflight)

McDonald, 22, of Carthage, Tennessee, an aerospace maintenance management major with a 4.0 GPA in the University Honors College, expects to head toward Oklahoma and Dallas, Texas, Thursday, June 2, weather permitting, after spending time in southeast Kansas.

McDonald is making the trip as part of an Honors College thesis project and to promote aviation to young people and adults at all of the approximately 75 stops he will make as he travels from the East Coast to the West Coast in his family’s 1995 Maule MX-7-160, a four-seat plane nicknamed “Molly.”

The 1911 pilot had a number of crashes and incidents along the way. Thus far on the 2016 trip, McDonald’s major issue has been weather.

“This has probably been the most unplanned yet rewarding and exciting day of the entire trip thus far,” McDonald wrote on Facebook as the Memorial Day holiday weekend approached.

Mom Lorrie McDonald had driven from Carthage to Dayton to join him for several days. “We had some plans,” Collin wrote, “but the unusual sound that I hear around 8:30 a.m. altered all that.

“As I look out the window for something that I audibly couldn’t identify, I was met with the strangest sight I have ever seen,” he added. “An aircraft slowly crept into view, passing just to the right and a few hundred feet above climbing. It was no ordinary aircraft. It looked like the Wright Brothers’ Flyer!

“We were planning on going to the Dayton-Wright Brothers Airport at some point in the day, but I told Mom we had to leave NOW so I could figure out what I had just seen.”

At the museum, McDonald discovered the facility not only had a replica of the Wright Flyer, but a flying one.

“For a hundred bucks, they would take you up on a flight,” he wrote. “Well, you only live once! So I set it up to come back around 11:30 and have a flight in what would be the most amazing aircraft I have ever flown.”

“The ride wasn’t long, but it was incredible,” McDonald wrote, admitting he had an “extremely dry mouth from where I had been smiling so much that the wind dried out all my salivary glands.”

From Dallas, McDonald will continue west through New Mexico, Arizona and Southern California. In all, McDonald expects to fly 4,300 miles on the Rogers path and 7,200 miles altogether.

MTSU senior Collin McDonald of Carthage, Tennessee, left Murfreesboro May 19 to begin a monthlong adventure that eventually will take him on a cross-country journey following a route taken by aviation pioneer Cal Rodgers more than 100 years ago.

McDonald, 22, who is a 4.0 GPA student majoring in aerospace maintenance management, plans to take 30 days to complete the flight he is calling “Vin Fiz2” in tribute to Rodgers’ plane — “The Vin Fiz,” named for a grape soda.

McDonald, a Buchanan Fellow in MTSU’s University Honors College, said he anticipates making at least 100 stops along the way.

The pilot reportedly had dozens of stops during his two-month flight, both scheduled and accidental, and became an instant national celebrity.Rodgers died in a plane crash, however, during an April 1912 exhibition in California.

“I am retracing his route from New York to Long Beach (California) via Chicago and Dallas,” McDonald said. “The whole purpose of the trip is to get more young people and adults alike — but especially the next generation — involved with general aviation.”

McDonald, who also is making the trip for his honors thesis project, said general aviation in young adults “has significantly declined in the last 20 years, and what that’s going to cause in the future is a massive pilot shortage as well as additional funding required to sponsor FAA (Federal Aviation Administration) and general aviation programs.”

Before heading to New York to start the transcontinental flight from Long Island, New York, two of his first stops will include Beaufort, North Carolina, May 20-21 for an Aircraft Owners and Pilots Association fly-in at Michael J. Smith Field. He then plans to travel on to Kitty Hawk, North Carolina, site of aviation pioneers Orville and Wilbur Wright’s first flight in 1903.

The family-owned airplane McDonald is flying on the trip is a 1995 four-passenger Maule MX-7-160, nicknamed “Molly” and only a year younger than he is.

McDonald plans daily updates on Facebook at “Vin Fiz Flight” as well as regular blog posts at VinFizflight.wordpress.com. He will fly an average of six hours a day.

McDonald is funding his trip through aerospace and Honors College scholarships, a GoFundMe account and a recent sale of commemorative T-shirts.

This fall, there will be three McDonalds attending MTSU on full-tuition Buchanan Fellowships. Collin and his brother, fellow senior Connor McDonald, the 2016-17 Student Government Association vice president, entered the university together in 2013, and sister Delanie McDonald will be a freshman this fall.

This marks the first time that three members of the same family are enrolled at MTSU with Buchanan awards, the highest academic scholarship at the university. They were home-schooled by their mother, Lorrie McDonald. (You can read more about them here.)

MTSU senior Collin McDonald visits the National Museum of the Air Force in Dayton, Ohio, and includes a stop by the Blackbird exhibit, the only aircraft never shot down while deployed on missions. The Carthage, Tenn., native is retracing the Long Island, N.Y., to Long Beach, Calif., route that aviation pioneer Cal Rodgers took in 1911. McDonald’s plane, nicknamed “Molly,” is parked at Wright Brothers Field. (Submitted photo)

MTSU senior Collin McDonald holds a commemorative set showing a 1911 photo of Cal Rodgers flying his plane, The Vin Fiz, and a piece of cloth from the plane. McDonald, who flew out of Murfreesboro Airport May 19, took the item with him on his plane.

MTSU senior Collin McDonald makes final checks on his 21-year-old Maule airplane, nicknamed “Molly,” May 19 at Murfreesboro Airport as he begins a 30-day journey to fly from New York to Long Beach, Calif.