Exhibit of McPhee’s photos from China opens Sept. 22 at Chamber

A special monthlong photo exhibit, “China: Through the Eyes of an American University President,” opens Monday, Sept. 22, at the Rutherford County Chamber of Commerce, as part of a joint MTSU and community salute to China.

With more than 300 digital images and 30 large prints in 14 different categories, the exhibit, located at 3050 Medical Center Parkway, chronicles MTSU President Sidney A. McPhee’s travels to more than 100 Chinese municipalities and provinces during his tenure at the university. 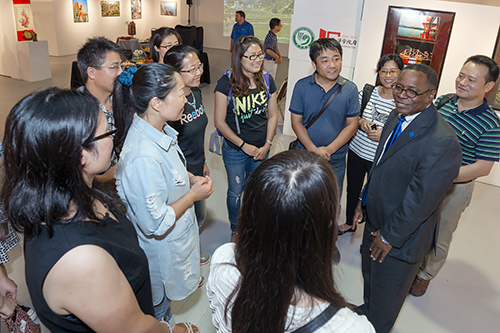 MTSU President Sidney A. McPhee discusses the photographs on display in Todd Art Gallery with attendees of a Sept. 11 reception and auction there. The photos, which McPhee took while on trips to China during his presidential tenure, will be on display at the Rutherford County Chamber of Commerce Sept. 22-Oct. 22. (MTSU photo by J. Intintoli)

And on Friday, Sept. 26, the Discovery Center at Murfree Spring and the Confucius Institute at MTSU will co-host a free evening of opportunities for children and families to explore Chinese culture and traditions.

Admission to “Confucius Institute Night,” set from 4 to 8 p.m., will be free to the public. Visitors will be able to enjoy mini-Chinese classes, dance performances and calligraphy demonstrations for “Confucius Institute Day” at the center, which is located at 502 S.E. Broad St. in Murfreesboro.

The community’s Chinese connections will be highlighted with a 55-inch video monitor that patrons can touch to access interactive programs about sites of interest in China, as well as food, music, kung fu, calligraphy, the Chinese zodiac and other topics.

McPhee said the Confucius Institute and the Discovery Center also will sign a partnership that evening to help create more joint programming and community activities.

During an exhibit and reception held earlier this month at MTSU’s Todd Art Gallery, an auction of framed copies of McPhee’s China photographs successfully raised $2,300 for a graphic design scholarship.

The Sept. 11 event at MTSU was also part of the university’s observance of the 10th anniversary of the worldwide Hanban Confucius Institute, a network of hubs for China-related cultural activities and a resource center for Chinese language, history and contemporary society.

McPhee said during the MTSU gallery event that his favorite photo in the exhibit is of a little girl with colorful barrettes.

MTSU President Sidney A. McPhee calls this photo of a child, taken in Suzhou, a city outside Shanghai in eastern China, one of his favorites from an exhibit at the Rutherford County Chamber of Commerce Sept. 22-Oct. 22.

He said he encountered the child while she was eating lunch near Shanghai, and she reminded him of his own daughter, Seneca, when she was young and her mother, Liz, decorated her hair with colorful ribbons and barrettes.

Rebecca White, a 21-year-old psychology major from Shelbyville, Tennessee, said that photo is also her favorite.

“It’s incredible that she was focused on him instead of the world around her,” White said of the photo subject. “She saw somebody that was willing to accept her culture.”

Noting that people have been his favorite photographic subjects in China, McPhee said, “You can learn so much without even asking them to say a word by the expressions on their faces.”

Ariel Tyndell, a 23-year-old graphic design major from Nashville who created the poster promoting the event, said she prefers a trio of photos titled “Detian Waterfalls in Guangxi.”

“I love the colors and the fog on the mountains,” Tyndell said. “It’s really gorgeous.”

The McPhee photo exhibit at the Chamber of Commerce headquarters will be open to the public from Sept. 22 through Wednesday, Oct. 22.

The photo exhibit expands upon McPhee’s 2012 internationally released book of photographic essays, “China: Through the Eyes of an American University President,” published by the Hanban-Confucius Institute. In 2013, China’s foreign ministry designated the book as a significant cultural presentation.

MTSU has tripled its international enrollment under McPhee’s watch and this year welcomed its largest class of international scholars.

For more information about the Sept. 26 Chinese culture celebration or the Sept. 22-Oct. 22 photo exhibit, contact the Confucius Institute at 615-494-8696 or cimtsu@mtsu.edu.

MTSU President Sidney A. McPhee gestures to the audience while describing photographs he took on his trips to China at a Sept. 11 exhibit in MTSU’s Todd Art Gallery. The subsequent photo auction and sales of his book, “China: Through the Eyes of an American University President,” raised $2,300 for a scholarship fund for graphic design majors. (MTSU photo by J. Intintoli)

The “College Gate” outside the old city wall of Xi’an, China, shown in this photo by MTSU President Sidney A. McPhee, shows a mix of traditional architecture and modern business as it welcomes guests to the “Ancient Culture Street” to enjoy arts, crafts, culture and shopping. An exhibit of McPhee’s China photographs, including this one, is set at the Rutherford County Chamber of Commerce Sept. 22-Oct. 22.

Tourists and citizens walk through the plaza surrounding China’s Beijing National Stadium, known as “the Bird’s Nest,” during the 2008 Olympics in this photo by MTSU President Sidney A. McPhee.