McPhee: ‘Nothing more important than student success’ at MTSU (+VIDEO) 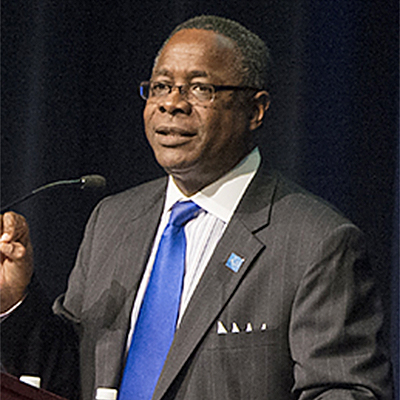 MTSU President Sidney A. McPhee, delivering his State of the University address Friday, outlined challenges ahead in the 2013-14 academic year and said “nothing is more important than … ensuring our students’ academic success.”

McPhee, speaking at the Fall Faculty Meeting that launches each new academic year at MTSU, said Tennessee’s taxpayers, plus news reports that put Tennessee in the bottom three of U.S. ACT scores, have made the university’s priority clear.

Even with statewide and national accolades for its efficiency in creating college graduates, he said, MTSU’s continued success depended on its “ability to help our students earn a college degree that enriches their lives and prepares them for a career.”

“These students are our responsibility, and we must discover and develop new innovative ways to help them be successful, instead of whining about who they are,” McPhee told faculty.

“… If students become an interruption in your day, you’re in the wrong business.”

MTSU President Sidney A. McPhee emphasizes a point during his annual address at the 2013 Fall Faculty Meeting in Tucker Theatre on Friday. (MTSU photos by Andy Heidt)

Citing President Barack Obama’s recent discussions about higher education reform, as well as Gov. Bill Haslam’s goal of dramatically increasing the number of Tennesseans with college degrees, McPhee said “it is our time for change, for transformation.”

“So many industries and systems that impact our lives have already been through similar transformations,” he said. “Now it is time for higher education to change. The public is demanding it.”

MTSU already has changed some administrative processes that created roadblocks for students, including a new policy that lets students register or re-enroll with an account balance of $200 or less. Previously, there was an across-the-board ban on registration for students owing as little as $5 to the university.

McPhee singled out MTSU’s Department of Physics and Astronomy during his remarks, commending it for meeting his challenge to help students succeed. The department has implemented more student-friendly teaching practices for introductory courses and is using high-achieving undergrads to serve as “learning assistants” for classmates in those courses, the president said.

The department’s reward — in addition to fewer failing grades, more physics and astronomy majors and more graduates — was a $20,000 check Friday as the first “President’s Award for Exceptional Departmental Initiatives for Student Academic Success.”

“I hope this department’s determination and this recognition serves as an indicator of the level of importance we must place on meeting the needs of students,” McPhee said.

Pointing out a campuswide task force’s discovery of an almost 40 percent failure or withdrawal rate in some general education courses, despite the students’ solid high-school GPAs and ACT scores, McPhee said faculty are already redesigning seven courses in the College of Liberal Arts and the College of Basic and Applied Sciences.

Those faculty are members of a task force created by University Provost Brad Bartel and Bruce Petryshak, vice president for information technology, which wants to apply the new teaching strategies throughout the university.

“Students who put forth reasonable effort in our courses must be provided the instruction and support they need to achieve success,” the president emphasized. “If students do not experience success in those early courses, they are not likely to persist at the university.

“We must become flexible and nimble enough to allow for extra support and assistance when our students encounter unexpected difficulties or roadblocks arise that might negatively affect their persistence toward graduation.”

At the conclusion of Friday’s gathering, MTSU Foundation President Bill Mooningham presented the 2012-13 Foundation Awards to 17 faculty members, including Bill Ford, a veteran economics professor in the Jennings A. Jones College of Business, who received the Career Achievement Award.

Dr. William F. Ford, left, economics and finance professor and holder of the Weatherford Chair of Excellence in Finance in MTSU’s Jennings A. Jones College of Business, accepts congratulations from President Sidney A. McPhee Friday. Ford received the 2013 Career Achievement Award from the MTSU Foundation.