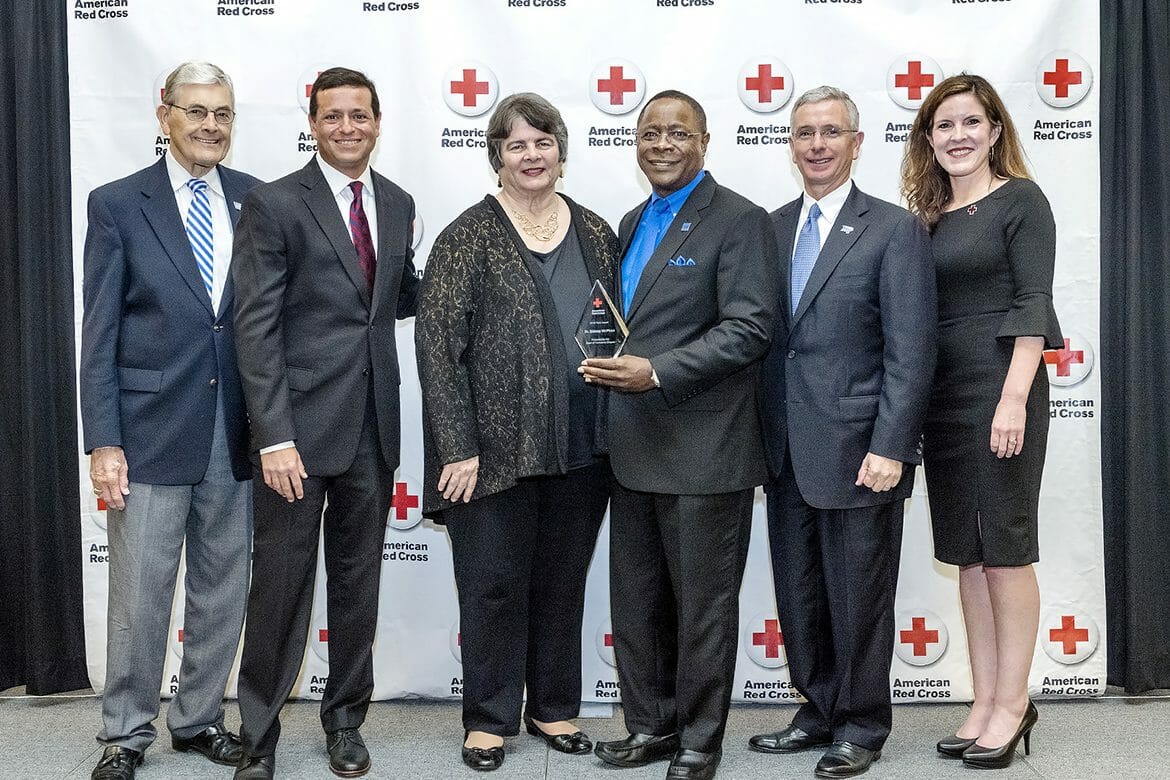 With his wife and adult children looking on from the crowd, MTSU President Sidney A. McPhee said “it’s very humbling” to be this year’s recipient of the American Red Cross Hero Award, an honor he accepted Wednesday, Feb. 21, on behalf of his family and the entire Blue Raider community.

The Red Cross Heart of Tennessee chapter, which covers 17 counties in the region, hosted the Heroes Breakfast, which drew about 300 supporters to the Student Union Ballroom where McPhee received his award.

“I would not be where I am today without my family and without friends and supporters that have been with us throughout they years,” said McPhee, now into his 18th year leading the Midstate’s largest university.

Middle Tennessee State University President Sidney A. McPhee, right, is presented the 2018 Hero Award by MTSU’s John Hood at the Feb. 21 Heroes Breakfast by the American Red Cross Heart of Tennessee Chapter inside the MTSU Student Union Ballroom. Hood, director of community engagement and support, was the 2017 recipient of the award. (MTSU photo by J. Intintoli)

“Receiving this accolade with so many fine people who have come before me is truly an honor that I will cherish,” he said.

McPhee said that when he and wife Elizabeth moved to Murfreesboro 17-plus years ago, they were intent on being deeply involved in the community. He noted how his wife, now retired from Murfreesboro City Schools, would frequently buy supplies for her students during her many years of teaching.

“To whom much is given, much is required. … We truly wanted to be involved in the life of this community and we wanted the university family to be a stronger part of this community,” he said.

“And we have lots of help with the outstanding faculty, staff and administrators at this university. They are the heart and soul of this institution and the reason I stand here today.”

MTSU alumna Kathy Ferrell, executive director of the local Red Cross chapter, thanked the university for its ongoing support and for its traditional “Bleed Blue Beat WKU” blood drive competition during the football season each year, an effort that has led to 7,690 pints of blood being donated since 2010.

Nick Paranjape, also an alumnus and former TV news anchor, moderated a Q and A with McPhee in which they discussed MTSU’s partnerships with the Red Cross over the years, including the university’s role as a shelter for evacuees from Hurricane Gustav in 2008 as well as its assistance after the Good Friday tornadoes the follow year.

McPhee said the leadership of MTSU staffers such as Campus Recreation administrator Ray Wiley, a longtime Red Cross volunteer and board member, played a critical role in the university’s ability to house hundreds of Gustav evacuees for two weeks in the Campus Recreation Center.

Middle Tennessee State University President Sidney A. McPhee, right, makes a point during the Feb. 21 Heroes Breakfast presented by the American Red Cross Heart of Tennessee Chapter inside the Student Union Ballroom. McPhee is the 2018 recipient of the Hero Award. At left is MTSU alumnus Nick Paranjape, who served as moderator for a Q and A session with McPhee. (MTSU photo by J. Intintoli)

University faculty and particularly Campus Rec staff “jumped in and worked overtime to make sure those individuals were well accepted and their needs taken care of,” McPhee said.

Riley reminded the crowd that they could assist the Red Cross “in providing life care to many families in need” by making a monetary donation and/or agreeing to volunteer, which represents 91 percent of the Red Cross workforce.

MTSU alumnus Darrell Freeman, vice chairman of MTSU’s Board of Trustees, joined McPhee and men’s basketball coach Kermit Davis in launching Raider Relief to raise funds and gather supplies for Cintron’s family and fly them down to the island in Freeman’s airplane.

“It was a team decision,” McPhee said, adding that his office, the Development Office and MT Athletics “adopted” members of Cintron’s family to gather supplies for their specific needs. “It was an incredible experience … it really warmed my heart and I knew that we were making a difference in people’s lives.”

For more about the American Red Cross Heart of Tennessee chapter, visit www.redcross.org/heartoftn or call 615-893-4272.