MTSU, University of Memphis to shine 1st spotlight on 1866 massacre 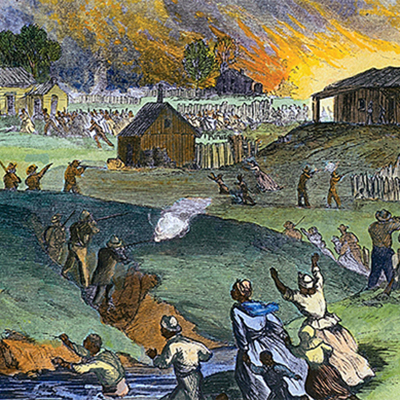 MEMPHIS — MTSU and the University of Memphis will co-sponsor the first public recognition of the historic impact of the 1866 rampage against African-Americans in Memphis.

This illustration depicting the 1866 attack on black Memphians was published in the May 26, 1866, edition of “Harper’s Weekly” magazine. MTSU and the University of Memphis s co-sponsoring the first public discussion of the “Memphis Massacre” in a May 20-21 symposium.

“Memories of a Massacre: Memphis in 1866, a Symposium Exploring Slavery, Emancipation and Reconstruction” will take place May 20 and 21 at the University of Memphis in the University Center Theater, located at 499 University St. on the Memphis campus.

MTSU’s Teaching with Primary Sources program, which is administered by the university’s Center for Historic Preservation, joined with the University of Memphis to lead a teacher workshop on the subject in April.

Historians will examine a three-day siege of murder, rape and property destruction that devastated black Memphians from May 1 through May 3, 1866. White police officers, firefighters and businessmen initially targeted former Union soldiers, but the violence expanded to encompass schools, churches and houses.

By the time federal military authorities declared martial law across Memphis, at least 46 blacks and two whites were dead. Another 70 to 80 others were wounded, and at least five black women had been raped.

More than 100 people had been robbed. Four churches, 12 schools and 91 houses had been burned.

“As part of our mission to tell the whole story of the Civil War in Tennessee, the Tennessee Civil War National Heritage Area recognizes the Memphis massacre as one of the defining moments in Civil War history that changed the course of Reconstruction policy and the shape of American citizenship,” said Lydia Simpson, programs manager for the CHP.

The Memphis massacre and similar violence a few months later in New Orleans convinced the U.S. Congress to enact tougher measures to protect civil rights in the aftermath of the Civil War.

“Reconstruction has gotten short shrift over the years, and this symposium will help to rectify that,” said Dr. Antoinette van Zelm, assistant director of the CHP.

Robert K. Sutton, chief historian of the National Park Service, will deliver the keynote address at 6 p.m. Friday, May 20. Topics to be discussed during the two-day event include “Urban Battlegrounds: Reconstruction in Southern Cities,” “Race, Gender and Sexual Violence During the Memphis Massacre” and “From Emancipation to Abolition in Civil War Tennessee.”

For more information, contact Simpson or van Zelm at 615-898-2947 or visit www.memphis.edu/memphis-massacre.