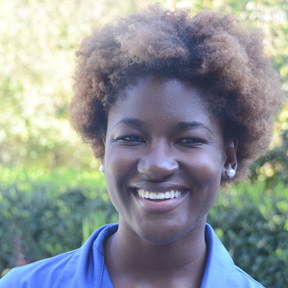 MEMPHIS, Tenn. — Kelsey Muskin of Memphis has made the most of her Middle Tennessee State University experience as she awaits graduation in seven months.

Muskin, who was in Memphis Monday, Oct. 21, for the MTSU “True Blue Tour” event at the Memphis Botanic Garden, is an organizational communications major who has been quite involved with campus activities. She expects to graduate in May 2014.

While at MTSU, Muskin said, she’s participated “in many hands-on activities” through the experiential learning program. She is a member of Delta Sigma Theta Sorority Inc., “where community service is very important to us.”

“Through my sorority, I have participated in various service projects with and around the university, as well as producing programs that are beneficial for the students on campus,” she added.

With dance as a minor, Muskin has participated in the MTSU Dance Club, also known as MPAC.

“My time here at MTSU has been very wonderful,” Muskin said. “The university is filled with positive faculty and students, and I love the True Blue spirit that we constantly display.

“Attending MTSU was one of the best things that I ever did,” she added. “I met so many friends and gained many networking experiences though my major and from my organizations.”

The Memphis native exhibited her communication skills when asked by university officials to share her MTSU experiences with the prospective students. A crowd of more than 300 people attended the student reception.

Muskin is the daughter of David and Jacki Muskin of Memphis.