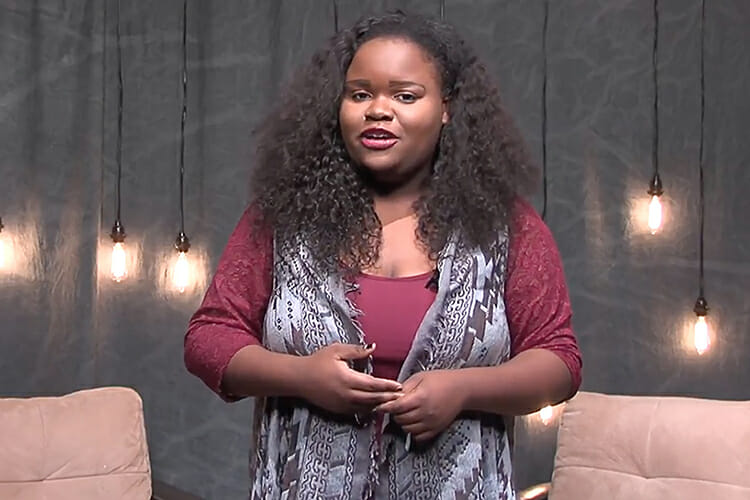 MTSU’s WMTS-FM 88.3 student radio station is saying its good-byes to its general manager as she embarks on her new journey as a television host.

WMTS listeners are used to hearing senior media management major Ebon’e Merrimon‘s radio show, “Deep Soul,” but she has left the airwaves to focus her attention on her new “Deep Soul” television series.

The show airs at 7:30 p.m. Wednesday nights on local Murfreesboro station MT10, a student-run television station that streams live via UStream and broadcasts in Rutherford County on Comcast channel 10.

If you miss out on an episode when it airs, you can watch at Merrimon’s YouTube channel.

“When it comes to ‘Deep Soul,’ I see an entire movement happening, and I can see so much with this,” said Merrimon, adding that her mission with the new TV series is to present a diverse line-up with a flavorful twist.

“I want people to understand that ‘Deep Soul’ is about what you feel, which is the foundation of music,” she said.

You can watch a recent episode, featuring R&B artist Caleb Minter, below.

Merrimon is no stranger to producing entertainment content for a wide variety of viewers. She also works for Cumulus Media, the second largest operator of AM and FM radio stations in the United States.

“I technically work for six radio stations as a promotion associate, where I’ve been able to do commercials, blogs and so much more with this opportunity,” she said.

Media expansion across a spectrum of platforms is giving students the opportunity to translate their communication skills across those platforms as well. Those deeply rooted in mass media, including Val Hoeppner, say they believe video is an entry point to creating appealing content.

She noted that one of WMOT’s growing efforts in keeping its audience engaged is a monthly online streaming video program.

“It’s a livestream video program called ‘Wired In’ … one of the significant pieces to it is that it’s video and has helped us cultivate a national audience,” she said.

Hoeppner is also director for the Center for Innovation in Media, which houses student media within MTSU’s College of Media and Entertainment. The collaboration in the center gives aspiring journalists the necessary tools to become versatile storytellers, she said.

“The ingredients are you have to be compelling but still follow the rules of video and have good audio, or people are out,” said Hoeppner. “I think if you have compelling video and tell a good story, people are going to stay there.”

MTSU senior Ebon’e Merrimon is shown inside WMTS-FM studios at the Bragg Media and Entertainment Building. Merrimon is preparing to leave the radio booth for the television set as creator and host of a new music-themed TV show, “Deep Soul,” on MT10. (MTSU photo by Jayla Jackson)