Human rights abuse in Mexico is topic of April 2 e... 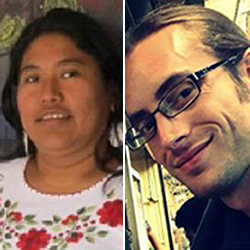 Human rights activists are coming to MTSU to discuss their work for the indigenous peoples of southern Mexico.

Azalia Hernandez of the Fray Bartolome de las Casas Human Rights Center and Stuart Schussler of Mexico Solidarity Network will speak at 4 p.m. Wednesday, April 2, in the Tom Jackson Building on campus. A searchable campus map with parking notes is available at http://tinyurl.com/MTSUParkingMap13-14.

The presentation will be in Spanish with English interpretation by Mexico Solidarity Network. This event is free and open to the public and is sponsored by the Department of Political Science, the Department of History, Global Studies and the Office of International Affairs.

Hernandez will discuss the center’s work in Chiapas, a poverty-stricken region of Mexico beset with violence against the indigenous population.

The conflict dates back to the 1990s, when a paramilitary group called the Zapatistas violently struck a blow for regional autonomy. Initially, the Mexican government quelled the uprising.

Since then, local residents have accused the government of backing other paramilitary groups to fight the Zapatistas, anyone believed to be allied with them or anyone who documents and reports human rights abuses. The government denies these accusations.

In addition to denouncing human rights violations, the Zapatistas and other indigenous groups continue to exercise their human rights positively by organizing autonomous health, education, agriculture and self-government projects.

Schussler will discuss Mexico Solidarity Network’s International Autonomous University, an institution offering instruction at “the undergraduate and graduate level on the theory and practice of social movements, popular education pedagogy and community-based research,” according to www.mexicosolidarity.org.

Schussler is a professor of social movement analysis in the study-abroad and master’s degree programs and also a speaking tour coordinator. He holds a master’s degree in international relations from the Facultad Latinoamericana de Ciencias Sociales-Ecuador and a bachelor’s degree from DePauw University.

For more information, contact Dr. Stephen Morris, chair of the MTSU Department of Political Science, at 615-494-7687 or stephen.morris@mtsu.edu.