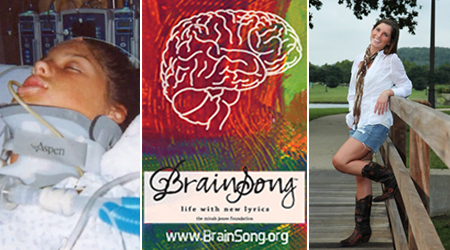 An MTSU alumna continues her quest to turn tragedy into triumph by raising awareness of traumatic brain injuries.

Recording industry major Micah Jones had just begun an internship with a company on Nashville’s Music Row MTSU when a car struck her July 9, 2004.

The impact of the collision propelled her into the air, and her head landed on a metal grate.

Jones spent six weeks in a coma in hospitals in both Nashville and her native Ohio. She was still in the hospital when her parents accepted her diploma for her at commencement.

Its mission is to “provide hope and serve as an advocate for women whose lives have been affected by a traumatic brain injury so they may develop a sense of dignity, a feeling of self-worth and the skills necessary to socially integrate with and contribute to the communities in which they live,” according to the foundation’s website, www.brainsong.org.

BrainSong will hold its second consecutive “Rock the Walk” fundraiser in Zanesville, Ohio, on Saturday, July 13.

Click on the graphic above to learn more about BrainSong.

According to the site, BrainSong provides hospitals and trauma centers with care packages for victims’ families, connects victims with support systems and holds confidence-building conferences for victims.

Two physicians from Ohio State University Medical Center are on BrainSong’s board of directors.

The Centers for Disease Control and Prevention say 1.7 million traumatic brain injuries occur each year in the United States.

They are contributing factors to a third of all injury-related deaths in the country.

To learn more about BrainSong, The Micah Jones Foundation, go to www.brainsong.org.

You also can watch a video created by Jones and her family about her journey at http://www.youtube.com/watch?v=_DaWtcB9rUE.

Micah Jones is shown in this family photo while comatose in Vanderbilt University Medical Center after a July 2004 traffic accident that left her with a traumatic brain injury.

Micah Jones is shown in this recent photo as her recovery continues.