Employers can register for MTS.. 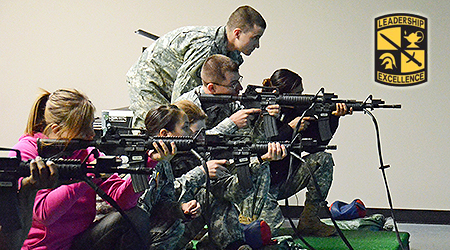 The university provided funding for an additional five-lane, $116,000 trainer unit, bringing to 10 the number of lanes available at the Engagement Skills Trainer.

At a March 8 open house, university leaders could view and shoot at the range, which is located in the ROTC Annex on campus.

“This was a joint effort between the Army and the university to provide us with a complete 10-lane system,” said Miller, who joined other officers to instruct cadets during the open-house target practice demonstration.

The simulator uses computers, lasers, projectors and pneumatic weapons to provide a realistic experience of firing a weapon, including recoil and sound. The sound is lowered enough, however, so that cadets don’t have to wear the ear protection required at a live range.

Senior ROTC Cadet Jenine Fajardo, 21, of Thompson’s Station, Tenn., said the simulator is an effective, efficient way for cadets to practice without the expense that comes from using real ammunition at a live firing range.

Dr. Greg Schmidt, right, an associate professor of psychology at MTSU, listens as ROTC Cadet Dalton Bowersox of Smyrna shows him how to use the indoor rifle range simulator at a March 8 open house inside the ROTC Annex. At left, Ginger Freeman, director of alumni relations, and Steve Estes, chair of the Department of Health and Human Performance, are nstructed by another cadet. (MTSU photos by News and Media Relations)

“Everything feels exactly like the (real) rifle,” Bright said. “The trigger squeeze, everything that you would do on an actual range is set up in this, except it’s with computers and lasers.”

Greg Schmidt, an associate professor in psychology, was among the faculty and university administrators who attended the event and tried out the simulator. He was impressed.

“It’s training without the expense,” said Schmidt. “You can see the benefit of it.”

The professor noted that it was the first time he’d fired a gun “in years,” adding that doing so gave him greater appreciation for what the cadets go through in trying to become commissioned officers.

MTSU ROTC cadets demonstrate how they use an indoor rifle range simulator on campus during a March 8 open house.