Next 'Spring Preview Day' is A.. 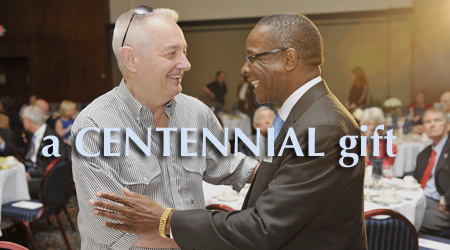 Inspired by a challenge to help build the University Honors College building a decade ago, MTSU alumnus Andrew Woodfin “Woody” Miller made a six-figure contribution that made the difference and pledged then to do more to further transform the University.

Today, with a gift of $10 million to MTSU, the largest from an alumnus in the University’s history, Miller is making a century’s worth of difference.

“Woody understood that we need donors with a vision of the future who share in the direction that the University is going, who would challenge us and motivate us and other prospective donors to support the University,” MTSU President Sidney A. McPhee said of the Nashville resident, a 1966 graduate of MTSU and a 1999 Distinguished Alumni honoree.

“This is one of the largest gifts ever made to the University. It will be transformational for us. It also will send the message that we are a major university, that we have donors who believe in the direction of Middle Tennessee State University and really want to make a difference in the lives of the students we educate on this campus.

“This gift is going to go a long way in helping this University continue to do the incredible job it has done for 100 years, and now, for the new century, it positions us in a very significant way to continue to make the kind of progress that we have mapped out for the University’s second century.”

The announcement of Miller’s gift was part of MTSU’s public launch of its $80 million Centennial Campaign, an effort begun nearly three years before the University observed its 100th anniversary on Sept. 11, 2011. Miller’s gift helped boost the campaign’s early commitments to nearly $54 million.

“Particularly at a time when support from the state continues to dwindle, for a university to fully accomplish its goals and reach these significant objectives for our second century, we need donors like Woody to step up to the plate,” McPhee added. “We are working with a number of other donors who are seriously considering six- and seven-figure contributions.”

Miller began his business career as a CPA with an international accounting firm, then joined Hospital Corporation of America soon after its inception and served as senior officer until 1982. During this period he also served as president and chair of the Federation of American Hospitals representing the international for-profit health care industry in Washington, D.C.

He also is owner of HealthMark Partners, an investment company, and serves on the boards of numerous other private corporations. Miller currently serves as chair and CEO of Women’s Health Partners of Nashville and chair and CEO of Vision America, Memphis.

At MTSU, Miller was one of the inaugural recipients of the Jennings A. Jones College of Business Exemplar Award in 2000. It recognizes alumni role models whose business, professional and personal achievements stand out for all to see and emulate.

“It’s very important to point out that we have donors like Woody who have given us some flexibility in using this remarkable contribution. It takes an individual who has trust in the University and how we would use this kind of gift in this particular fashion to allow us to move the University forward,” McPhee added.

“We’ve had some conversations about some particular areas in which this gift can be used, but he’s been very good in listening to us and we’re matching his interests, his passion, with the needs of the University. We will be applying those principles in terms of how we use the $10 million.”

To learn more about the University’s Centennial Campaign, visit mtsunews.com/centennial-campaign. You also can watch a brief video from the April 13 event below.