Milton scholars arrive ‘in bounds’ for...

MTSU professor among Top 10 at.. 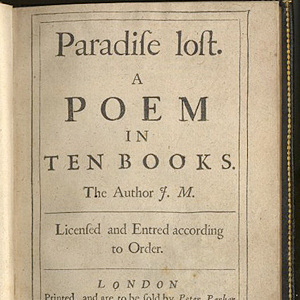 The Department of English at MTSU will celebrate its 21st anniversary as the sponsor and host of the Conference on John Milton Oct. 17-19 at the DoubleTree Hotel in Murfreesboro.

This 12th biennial conference, first held in Murfreesboro in 1991, attracts scholars of the great English poet Milton, who is best known for his 17th-century epic “Paradise Lost.” Registration is scheduled for Thursday evening, Oct. 17, with the conference itself planned Oct. 18 and 19.

Dr. Kevin Donovan, an MTSU English professor and one of the conference’s directors, has said past conference participants traveled from Japan, Korea, Australia, New Zealand, the United Kingdom and Norway, as well as from every region of the United States.

The conference, which attracts about 100 Milton scholars each session, has resulted in an award-winning series of collected essays as well as eight books of edited collections of the best papers from each conference.

MTSU Professor Emeritus Charles W. Durham, past president of the Milton Society of America, and Kristin A. Pruitt, professor emerita of Christian Brothers University, again will serve with Donovan as co-directors of the event.

This year’s plenary speaker is Dr. John Rogers of Yale University, who will discuss “Newton Reads Milton: Heresies of Creation in the ‘Principia’ and ‘Paradise Lost’” beginning at 9 a.m. Friday, Oct. 18, after an introduction by MTSU Provost Brad Bartel. You can see a complete list of speakers at www.mtsu.edu/english/milton/2013MiltonConfProgram4.pdf.

The registration cost of this year’s event is $120 per person and includes admission to all conference sessions.

For more information on the conference, please visit www.mtsu.edu/english/milton or contact Donovan at Kevin.Donovan@mtsu.edu.