In the News: NewsChannel5 cove.. 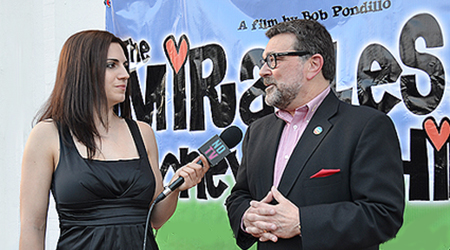 The kudos keep rolling in for “The Miracles on Honey Bee Hill,” the latest independent short film from MTSU professor Dr. Bob Pondillo and his crew of students and alumni.

The 23-minute film, which was two years in the making, has been an official selection at nearly 40 film festivals worldwide. It was translated into Czech and shown Nov. 8-14 at the Mezipatra Film Festival in the Czech Republic.

The latest honor is the “Best Short Narrative” award, which was presented Nov. 16 at the Big Mini-Film Festival at Long Island University in Brooklyn, N.Y.

Other top awards for “Miracles” include:

Nikki DeCroce of NDTV interviews MTSU’s Dr. Bob Pondillo outside the Belcourt Theatre in Nashville May 8 before the premiere of “The Miracles on Honey Bee Hill.” (MTSU photo by News and Media Relations)

With a mostly juvenile cast, “Miracles” tells the story of Millie, who is beloved by everyone in her church until she introduces the congregation to her soulmate, Ed.

A DVD of “Miracles” is available for a $15 donation to the Tennessee Equality Project at www.wepay.com/donations/595625. More information is available at http://miraclesonhoneybeehill.com as well as on Facebook and Twitter.