MTSU recognized for support of..

Monday night wasn’t the final presidential debate after all. 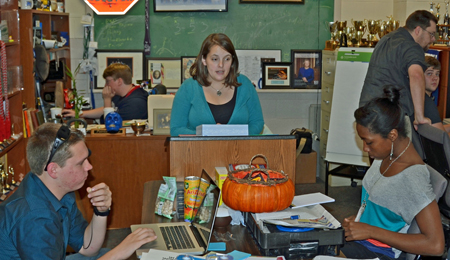 The Blue Raider Debaters are teaming up with Student Programming and Activities for a special “Think Before You Vote” event, featuring a public “Mixed Plate Debate” at 8 p.m. Thursday, Oct. 25, in the Parliamentary Room of the university’s new Student Union Building.

Attendees will see the nationally award-winning students in action as they conduct a mock presidential debate between President Barack Obama and former Massachusetts Gov. Mitt Romney.

Preparation is intense and requires hours of research — analyzing a candidate’s voting history, reading published statements and press releases, watching news clips — all in an effort to portray the party as accurately as possible. Such dedication should make the event all the more exciting for spectators watching what debate coach Patrick Richey calls an “issues only” debate.

“There will be no ad hominems or mud-slinging,” Richey explained. “This will strictly be about what policies the candidate would use and how they would use them.”

Smiling, he continued, “This might be the cleanest debate of the year!”

Last fall the team held a Republican primary debate and received enthusiastic support from more than 100 people in attendance, and Richey said he anticipates this year’s event to draw a considerably larger crowd. Since the students are studying the candidates so closely, the Oct. 25 debate offers each audience member an opportunity to become a more informed voter.

While the entire group developed topics and questions during practice, the actual debate will be between two team members selected to represent Obama and Romney.

Moderating the event, which should last two hours, will be Dr. Jan Leone, associate dean for the College of Liberal Arts.

Comprising about 30 members from a variety of university programs with ages ranging 17 to 30, the group has achieved a great deal of success in a short amount of time.

The MTSU Debate Team has had an illustrious history, and, like the university, it also celebrated its centennial last year. The team lacked structure in recent years, but last year Richey, who also is the director of forensics for MTSU as well as professor of communication studies in the Department of Speech and Theatre, revived the group.

“We’ve come a long way,” said team captain Mary Choate. “We pulled the team back up again, and last year, at every tournament, someone at least went to the quarterfinals.”

Because of each student’s continued dedication and efforts, Choate said she is “confident the team will achieve a lot this year and for years to come.”

As the team flourishes under Richey’s coaching, the professor said he’s proud of all his students and their individual achievements while on the team and after graduation.

“At the end of the day, it’s all about them,” he said, “what they learn and the benefits they get.”

For all potentially interested debaters, the team maintains an open-door policy and invites anyone to participate. While no experience is necessary, a successful debater must be willing to argue, keep up with current events and be open-minded.

Practice is held every Wednesday from 4 to 6 p.m. in Room 312 of the Keathley University Center.

For more information on the “Mixed Plate Debate,” visit www.mtsu.edu/events/thinkbeforeyouvote.php. For updates on the MTSU Debate Team,visit www.mtsu.edu/debate or contact Richey at 615-898-2273 or Patrick.Richey@mtsu.edu.