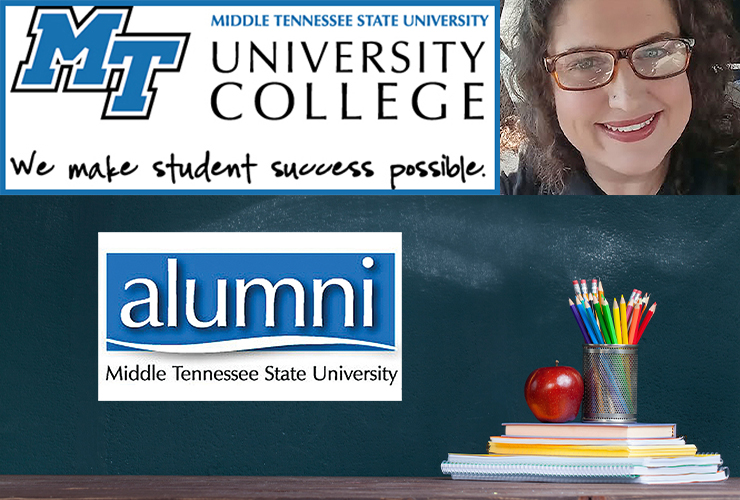 A professional educator is thriving after earning her degree at Middle Tennessee State University — 25 years after she graduated high school.

Her love for education started when she began work as a substitute in her local school system. She had homeschooled all three of her kids and never thought about working full-time as an educator, but she said getting to know all the other children in the classes where she worked as a sub made her fall in love with public education.

“Being in the classroom was just a whole new element of education that I had not been a part of since I was in high school,” said Sells, who is now 43 and earned her degree in integrated studies in 2021 through the University College.

College wasn’t an option early on for Sells. She was already married and a mother by the time she graduated high school.

“My world was totally different,” she said, laughing. “I’ve never done anything the traditional way my entire life.”

By the time her oldest son graduated high school, she was ready to take on the challenge of earning her own degree. While still homeschooling her two younger children, in 2018 Sells enrolled at Motlow State Community College to earn her associate degree.

“I had a lot on my plate,” she said. “I wish I had not made it so hard on myself, but I was bound and determined to finish.”

While at Motlow, Sells participated in an innovative dual-enrollment partnership between the college and MTSU that allows Motlow students to enroll at both institutions and take MTSU’s Prior Learning Assessment course.

Through that course, referred to as PLA, students leverage one of the biggest advantages MTSU can give to its adult students who are finishing their degrees.

Students convert learning from their prior work, training and certifications into college credit that can be used to satisfy electives in their degree program. They can earn and apply up to 48 elective credits, all for the cost and time of a three-credit-hour course.

Sells documented 51 PLA credits, more than she could use.

“It was a wonderful program for me,” she said. “It basically knocked almost two years off of my studies.”

Sells is proud of the work she put into creating a portfolio of all her professional accomplishments, but she said she never expected to document those 51 extra credits.

“Financially, this was a huge boost,” Sells said. “I was already taking classes at Motlow and chose to pay for the MTSU PLA course, so I really wanted to do well.”

Using 2022 tuition rates, Sells saved more than $19,000 by taking the Prior Learning Assessment course at MTSU.

She credits Cathy Delametter, the course’s instructor, with her success.

“Cathy reminded us constantly to ‘trust the process,’” Sells said. “It was difficult, but it all came together in the end, and we all said, ‘Ah, I get it now!’”

“The PLA class is more work than most students expect. It requires students to reflect on learning they’ve acquired from work and training programs, then provide detailed documentation to support that learning,” Delametter said.

“But it is well worth the effort. On average, students earn 27 college credits for the time and cost of one three-credit-hour course. And equally important is the students’ recognition and pride for all they have learned from their years of work.”

Sells agreed that balancing her time was the biggest challenge she faced. In addition to her classes, she was homeschooling her kids, substitute teaching, and driving a school bus.

“I did a lot of my school work at night,” Sells recalled, laughing. “Sometimes I’d be able to read a little bit during breaks when I was subbing, but a lot my work was done when I got home in the evening.”

Since she began the program, Sells has recruited 10 or 15 of her friends to do what she did, too.

“I tell so many that are my age and wanting to do something they’ve never done before that it is possible,” she said. “I didn’t ever think I would have my degree when I graduated high school.”

Sells said that when she graduated with her bachelor’s degree in 2021, she wanted to encourage everyone else because of how fulfilling the experience has been for her.

“I needed a fast track, and the PLA course opened so many doors that I would not have been able to walk through without it,” she said. “I’m so thankful for PLA and MTSU, because without it I would not be where I am today.”

Sells is mulling over returning to MTSU to earn her master’s degree, and she said she’ll be ready for the challenge when she makes her decision.

If you’re interested in learning more about the partnership between Motlow and MTSU or the Prior Learning Assessment course, visit mtsu.edu/finishnow.