Middle Tennessee State University announced Monday, Nov. 15, that it has secured funds for a $66 million project to build a new student-athlete performance center behind the north end zone of Floyd Stadium as well as make stadium improvements – the first of a three-phase, $100 million-plus plan to upgrade athletics facilities. 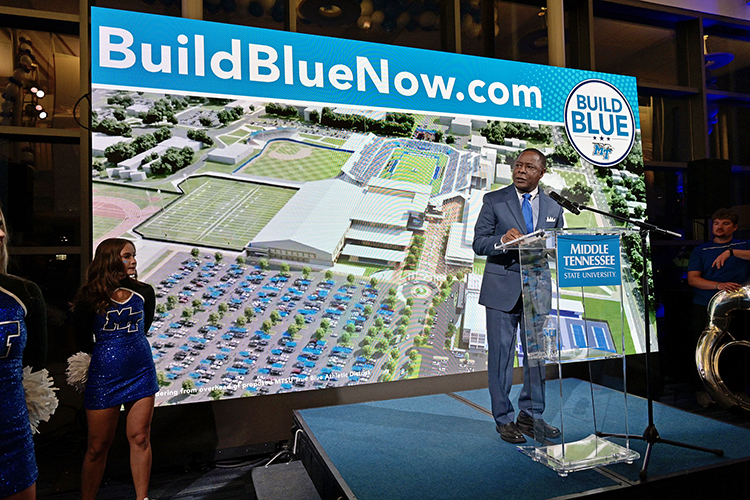 MTSU President Sidney A. McPhee addresses the crowd inside the Kennon Hall of Fame Monday, Nov. 15, during the announcement of the university’s Build Blue Now campaign to invest $100 million to upgrade Blue Raider athletic facilities, including construction of a new Student-Athlete Performance Center next to Floyd Stadium. (MTSU photo by Andy Heidt) 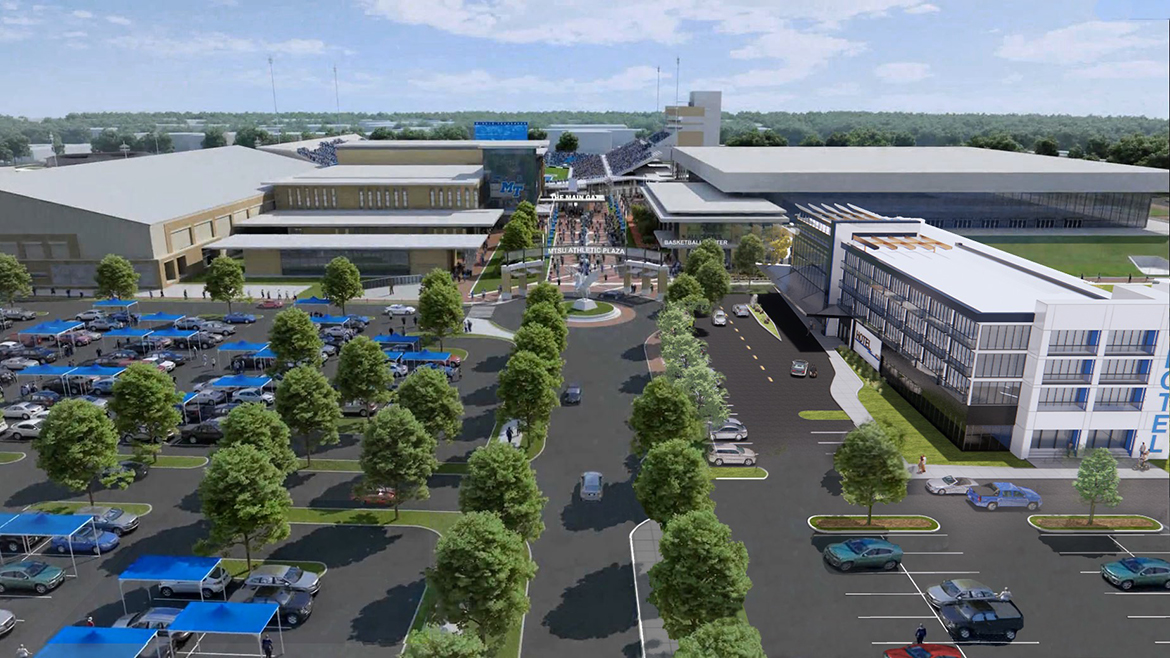 This artist rendering shows the proposed upgrades to MTSU athletic facilities as part of the Build Blue Now campaign to invest $100 million for construction and upgrades in and around Floyd Stadium and Murphy Center. (Courtesy of MT Athletics)

President Sidney A. McPhee, along with Trustees Board Chairman Steve Smith and Athletics Director Chris Massaro, revealed details on the milestone during a rally-style ceremony at the Emmett and Rose Kennon Athletics Hall of Fame, just before the tipoff of the Lady Raiders’ game against Vanderbilt.

Built on the site of the current weight and gameday rooms adjacent to Murphy Center, the three-story structure will house training, strength and conditioning, and equipment centers. Football’s locker and meeting rooms and personnel offices will be moved from Murphy Center into the new facility.

Design of the new facility will begin immediately, with project completion expected before the start of the 2024 Blue Raider football season. GMC+HOK, a team that helped build similar projects at Vanderbilt, Auburn, Georgia and other universities, will oversee design of the project. The State Building Commission recently approved MTSU’s plans for the project.

McPhee laid out the university’s vision for the project for those at Monday’s announcement, standing before a large LED wall that projected the architectural rendering of the transformed athletics campus.

“The importance of enhanced facilities became clear to me during the shifts in the national collegiate landscape prompted by the realignment of athletic conferences,” McPhee said. “The decision we made to remain with Conference USA aligns squarely with our desire to bring about meaningful change in our athletics campus.”

Read the full story at goblueraiders.com. 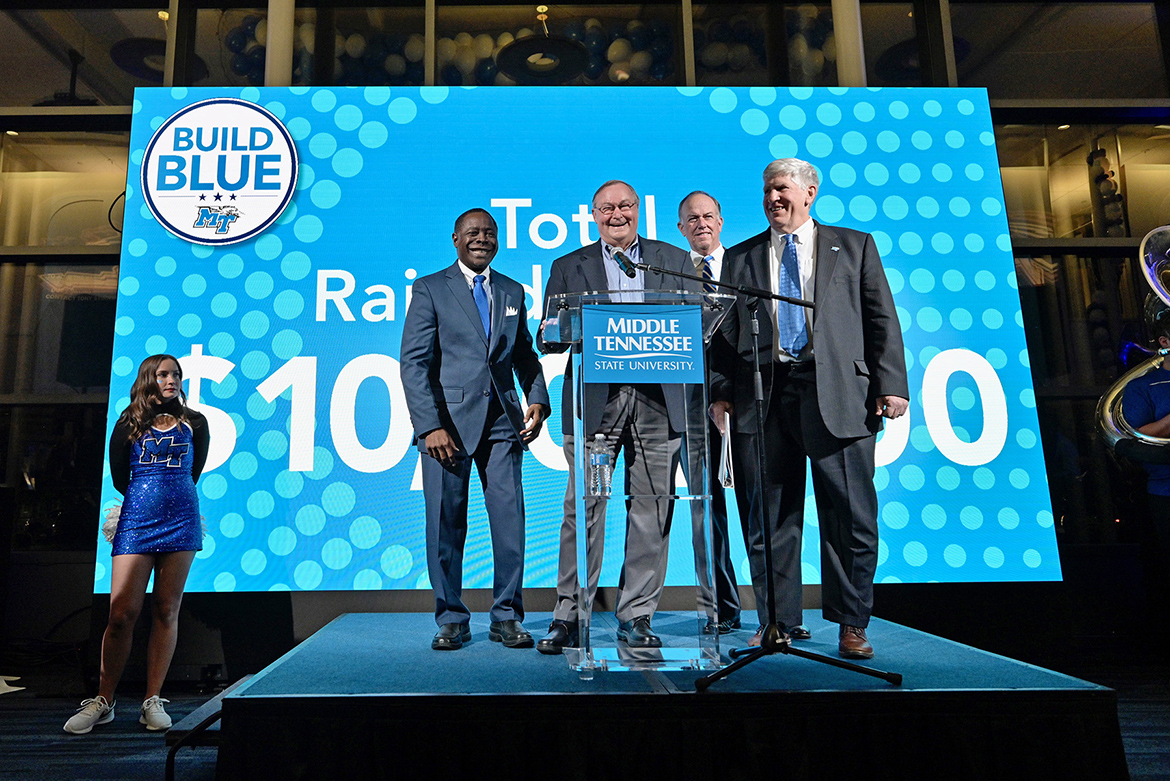 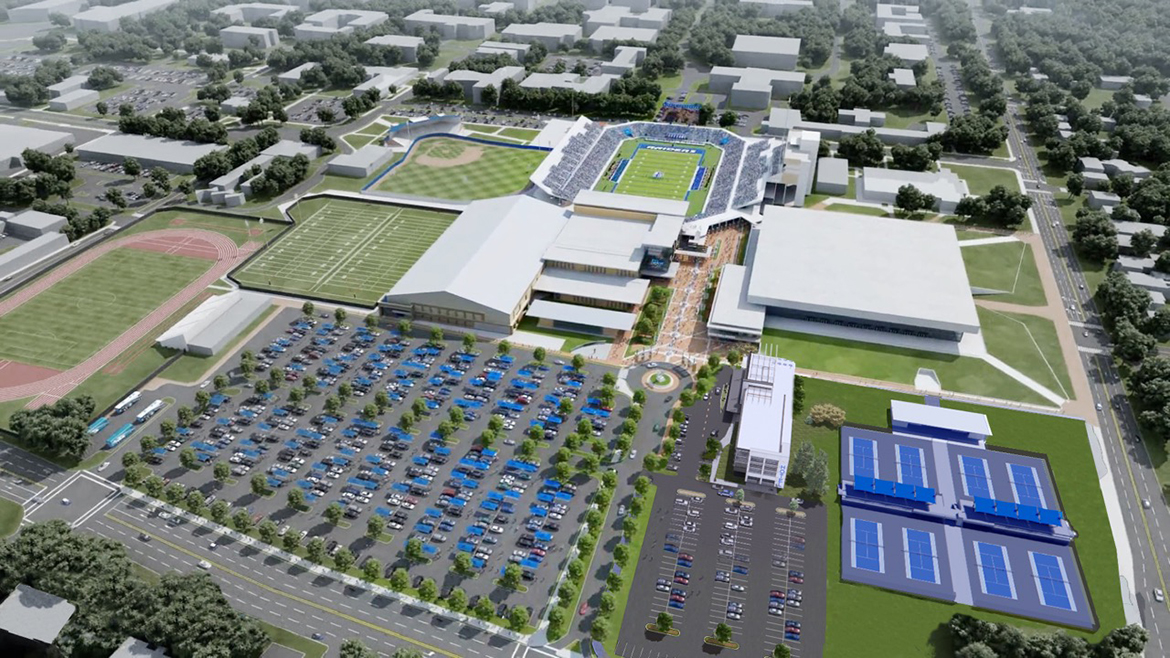 This artist rendering shows an aerial view of the proposed upgrades to MTSU athletic facilities as part of the Build Blue Now campaign to invest $100 million for construction and upgrades in and around Floyd Stadium and Murphy Center. (Courtesy of MT Athletics)