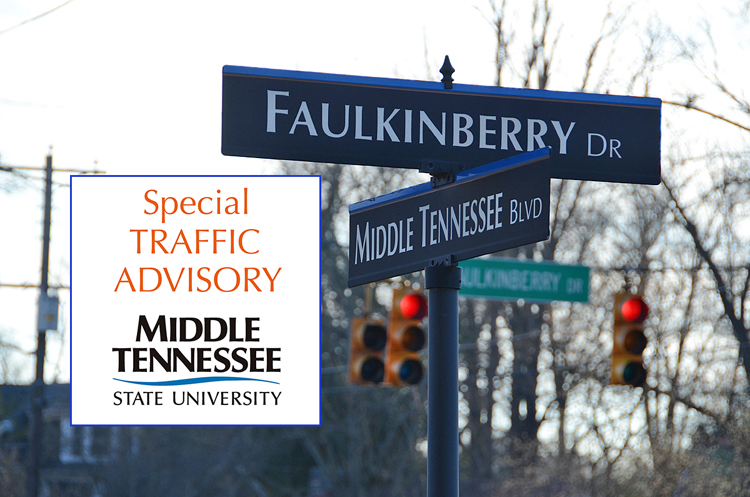 The long-awaited opening of the Middle Tennessee Boulevard widening project near the MTSU campus is set for all northbound lanes from East Main Street to Greenland Drive beginning Wednesday, March 6, according to a city of Murfreesboro news release.

Paving of MT Boulevard will be completed Wednesday with all northbound lanes opening during the day and one southbound lane remaining closed until landscaping in the median is completed, the release states.

Final paving of MT Boulevard will not be completed until after spring commencement ceremonies in May, city officials said, although all lanes will be open to traffic following the landscaping installation.

The project was initially expected to be completed by fall 2018, then December 2018, but was hampered by delays.

Even before construction got underway, the project was delayed by a federal government audit of the city’s right-of-way acquisition procedure, which required a temporary construction easement from MTSU. The city took land needed for wider lanes and bike paths from the MTSU campus.

“Despite the unfortunate delays, both the city and MTSU were very committed to this project which has been in the works for more than a decade and vital to the MTSU corridor,” Public Works Director and City Engineer said Chris Griffith in the release.

“Ultimately, we are happy with the upgraded look to the west side of the MTSU campus, but [we] regret that it didn’t get completed in accordance with the original timeline.”

Construction on the upgrade began in December 2016; the city of Murfreesboro has overseen work done by Nashville contractor Jarrett Builders. With the MT Boulevard improvement project completed, the following changes will improve traffic flow along the thoroughfare:

• A pull-in area for buses has been added to the front of Murphy Center.

• Pedestrian crossings with signals have been added at Lytle and Division Streets, and crosswalks at Bell Street and Faulkinberry Drive have been upgraded.

• Brick walls with planned MTSU signage have been erected at the corners of Greenland Drive and another wall added at East Main Street to better define major entry points onto campus.

• Flagpoles are erected at Faulkinberry Drive.

The $18.2 million road improvement project upgraded the 0.8-mile section of Middle Tennessee Boulevard from its former four and five lanes to a consistent four-lane divided street with a landscaped median between East Main and Greenland Drive.

For more information on the MT Boulevard project, contact Griffith at 615-893-6441 or cgriffith@murfreesborotn.gov or project coordinator Mike Stacey at 615-642-3134.