After hailstorm, most of MTSU’s fleet flying again...

Allie and the Aussies

After hailstorm, most of MTSU’s fleet flying again 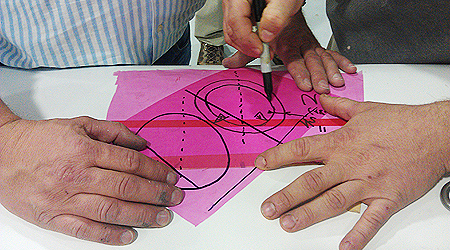 Christoph Juette, left, a composite structural engineer for Diamond Aircraft, plans the layout of a repair for one of MTSU’s fleet as Gabe Henkel, assistant flight-training manager for the Department of Aerospace, looks on. (photo submitted)

All but four of MTSU’s aircraft damaged in an Oct. 18 hailstorm are back in active service, and the remaining grounded planes are expected to get flight approval soon.

The severe hailstorm that pelted Rutherford County that afternoon grounded the entire fleet and damaged 22 of the University’s 25 aircraft.

The fleet includes 20 Diamond and five Piper aircraft. Four of the Diamond planes will remain grounded until they are repaired and cleared for use, officials said.

Diamond Aircraft President Pete Maurer commended MTSU for making the safety of its aerospace students a top priority and for making the call to ground all the planes.

“With 400 students in the program, we knew they needed a very quick solution,” Maurer said.

The planes received a reported $250,000 in damages but all were insured, officials said.

“There was much public consternation and speculation about the extent of damage and reparability of the all-composite Diamonds,” Maurer said.  “I had a feeling that this would not be nearly as bad as was being speculated.”

The aircraft’s composite construction makes it tough and resilient, Maurer continued, noting that only two planes’ outer surface was penetrated. Damage was limited to the area of the spars where the outer skin would not absorb the golf-ball-sized hail, he added.

“That is why we immediately dispatched our experts to assist MTSU in assessing the damage, air-worthiness and reparability of the Diamonds,” he said.

Juette and an MTSU aerospace department member work together to diagram a planned repair for the fleet. (photo submitted)

Dr. Wayne Dornan, chair of the MTSU Department of Aerospace, noted that the “Diamond airframes suffered very little damage in comparison to the metal aircraft, and the minimal structural damage that did occur was quickly repaired.”

Including the 400 professional-pilot concentration students, the MTSU aerospace program has grown to 750 students in five concentrations. It is regarded as one of the leading flight schools in the nation.