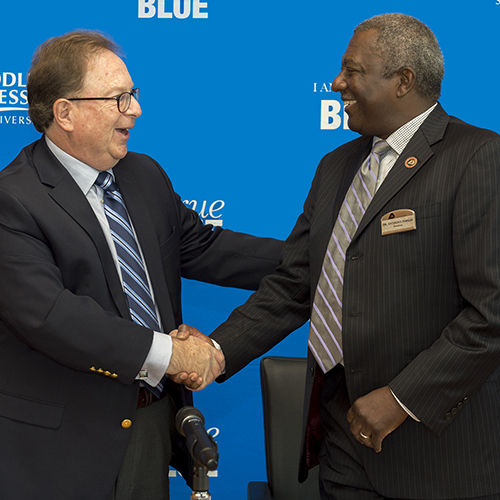 Officials from MTSU and Southwest Georgia’s Albany Technical College signed an agreement Tuesday allowing students who graduate with an associate degree from Albany Tech to transfer to MTSU to earn their bachelor’s degree in electromechanical engineering technology.

With their campuses about 400 miles and six hours apart, MTSU Provost Brad Bartel and Albany Technical College President Anthony Parker signed the 2+2 transfer agreement — two years at Albany Tech followed by two years at MTSU. It marks the first time MTSU has gone beyond the state’s borders to forge such a partnership.

The purpose of the agreement is to facilitate the transfer of Albany Tech students to MTSU, provide specific advisement for Albany Tech students who intend to transfer to MTSU, and to encourage academic and administrative coordination between the institutions in the electromechanical engineering technology program.

“The agreement satisfies the need for students from this Georgia college to come to MTSU and articulate their associate degree with MTSU coursework in electromechanical engineering technology for our Bachelor of Science degree. We are honored that Albany Technical College chose MTSU for this 2+2 program.”

Parker said four of his community’s 21st-century manufacturers “will likely employ graduates with the skills that ATC and MTSU can jointly provide.”

“The hybrid electrical and mechanical degree will provide skill sets in the exact proportions needed by our region’s manufacturers,” Parker added.

“We expect that a number of graduates from ATC’s associate degree program will want the career advancement that a bachelor’s degree can provide. We are grateful to Middle Tennessee State and look forward to a long relationship.”

“We’re always excited about getting new students in our program,” Boles said.

“Safe to say, we are very pleased Albany Technical College searched and found our program. Their desire to have an articulation agreement with us is very rewarding.”

Boles said Albany Tech students wanting to be part of the MTSU program will need to ask for in-state tuition when applying.

Albany Tech has about 4,000 students and electromechanical engineering technology is one of many areas of study. Mumford said there are 50 students in this concentration.

Albany Technical College is a public postsecondary institution of the Technical College System of Georgia and provides technical education and training support for the evolving workforce needs of Southwest Georgia through traditional and online classroom settings.

For more information about Albany Tech, go to www.albanytech.edu.

MTSU was founded in 1911 as one of three state normal schools for teacher training and is now the oldest and largest public university in Middle Tennessee. With an enrollment of more than 23,000 students, MTSU is the largest undergraduate university in Tennessee.