MTSU gets help from special gu.. 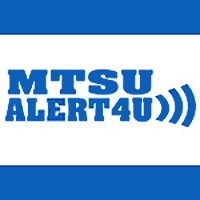 The following text comes from the university’s “Alert Updates” page, located at www.mtsu.edu/alertupdates, which is part of the network of campuswide information sources linked to MTSU’s Rave Mobile Safety emergency notification system.

11 A.M., SEPT. 17, 2014, MTSU TIMELY WARNING: On Sept. 16, 2014, at 8:34 p.m., Middle Tennessee State University Police received a robbery complaint from a female student. A timely warning concerning an attempted armed robbery was issued. Subsequently, based on information obtained from the victim, this incident is now being investigated as a sexual battery, and this warning is being distributed to better inform the campus community of the seriousness of the incident.

The suspect was described as a light-skinned black male with freckles on his face. He was possibly 18 to 25 years old and was wearing a dark gray hoodie.

If anyone has any information about this individual or have knowledge of this incident, they are urged to contact MTSU Police at 615-898-2424. If you have knowledge about this or any other crime, you may also contact CrimeStoppers at 615-893-STOP (7867).

All students are encouraged to remain aware of their surroundings, walk in well-lit areas and consider other personal safety tips found at the MTSU Police Department website, http://police.mtsu.edu. The website also has information about services offered by MTSU Police, including the Student Escort Program and the free MTSU Rave Guardian app, which turns a mobile phone into a “virtual escort” that connects directly to MTSU Police in case of emergency.

This timely warning notification is made in compliance with the Jeanne Clery Act and the Higher Education Opportunity Act.

11:14 P.M., SEPT. 16, 2014: Armed robbery reported at Scarlett Commons, located at the intersection of MTSU Boulevard and Blue Raider Drive on the MTSU campus. Leave that area immediately and stay away. The suspect was described as wearing all black clothing and black ski mask, and he was armed with a black handgun. Please report suspicious activity to MTSU Police at 615-898-2424.

9:01 P.M., SEPT. 16, 2014: Attempted armed robbery reported at the MTSU Lot at the intersection of MTSU Boulevard and South Rutherford Boulevard. Leave that area immediately and stay away. The suspect was described as a tall, light-skinned black male with a lot of freckles on his face. He was wearing a gray hoodie and carrying a knife and was last seen on foot running south toward Greek Row. Please report suspicious activity to MTSU Police at 615-898-2424.

MTSU students, faculty and staff who also want to receive text and/or voice alerts can click here, log in with a  PipelineMT username and password to update their contact information. (Rave Alert FAQs, including adding or changing contact information, are available here.)

When there’s not a situation on or near campus warranting emergency alerts, the “Alert Updates” page displays a generic message advising visitors to check back when necessary and to contact the MTSU Police Department if any suspicious activity is observed.