MTSU alumna has designs on future in Diet Coke T-s... 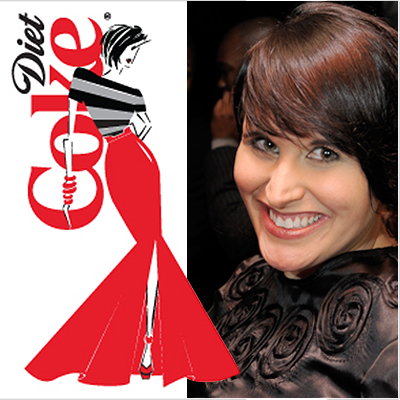 An MTSU alumna is in the running for a design contest championship that could be one of the biggest breaks of her career.

Julianna Bass, a 2002 graduate with a bachelor’s degree in textiles, merchandising and design, is one of the 20 semifinalists in the Diet Coke Young Designer Challenge.

Bass submitted a design promoting Diet Coke to be emblazoned on a T-shirt. The grand-prize winner will get $10,000 and a trip for two to Nashville to see Taylor Swift in concert.

Most importantly, the winner will get an opportunity for his or her T-shirt design to be produced and sold at Target stores nationwide.

The 20 semifinalists are being narrowed down to 10 finalists based on the largest numbers of votes received from the public by June 30.

From among the final 10, fashion designer Rebecca Minkoff will decide the winner. While the announcement originally was scheduled for Monday, July 15, the date has been rescheduled for August, according to the website, www.dietcoke.com/designerchallenge.

Bass’ design and the others are still on display at www.dietcoke.com/designerchallenge. Viewers were able to vote for their favorite design by moving a cursor over it and clicking “vote now.”

Click on Bass’ T-shirt design above to learn more about it. (Watch for the “Julianna B.” ID.)

Bass’ design shows a model wearing a grey-and-black-striped shirt and a red mermaid skirt flared at the knees. She is resting her hand on the “C” in “Coke.”

In her description, Bass writes, “The inspiration for my design was centered around trust. … We can count on Diet Coke to make us feel and look great! It tastes divine. It’s undoubtedly refreshing, oh so chic, and causes absolutely no caloric anxiety!

“We trust you, Diet Coke. We count on you. We lean on you. And you deliver every single time.”

Bass, a native of Pulaski, Tenn., moved to New York after graduating from MTSU to enter The Fashion Institute of Technology. She specialized in eveningwear and was named 2004 Designer of the Year in her class.

Following an internship with designer Marc Jacobs, Bass honed her talent as an employee of several designers in the Garment District, including Bill Blass and Elie Tahari before establishing her own fashion line for the first time in 2008.