MTSU alumna soars over nation’s capital in a Black... 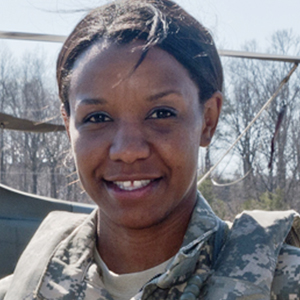 In her first semester at MTSU in 1998, she was the only African-American and the only woman in her aviation class.

Elosiebo, a platoon leader with an air ambulance unit in the D.C. area, flies two or three times each week and remains in a constant state of readiness. Her unit can hoist people from difficult-to-reach places with as little as one hour’s notice and cares for critically injured people en route to hospitals.

She’s the first African-American woman in her current post, but she prefers to focus on her work and all the men and women who’ve served before her.

“We’re always prepared to support civil authorities,” Elosiebo said. “We really value being able to support communities in the National Capital Region. It’s more of an honor to get to represent the District of Columbia.”

Being entrusted with Army Black Hawk helicopters is no small feat. Elosiebo’s recurring dream as a child was considerably less expensive than her current responsibility, but it was unattainable — flying with her siblings on her back, without an airplane or helicopter.

The Memphis Black Hawks, a group of former military pilots in Elosiebo’s hometown, gave her a glimpse of her real future by sending her skyward with a woman pilot when she was 11 or 12 years old. She also logged some flight time with the Civil Air Patrol and the Boy Scout Explorers.

Winning the Tennessee Board of Regents’ Otis Floyd Scholarship for outstanding high school scholars sealed her decision to attend MTSU. It paid for her books and tuition, and she worked at the Opryland Hotel to pay for everyday expenses.

Elosiebo said MTSU’s InFlight summer program was one of the important events of her life. She cited Dr. Paul Craig, an MTSU aerospace professor, as having an enormous positive influence on her.

“He was a good mentor for me and he had a personal impact on me,” said Elosiebo. “I greatly respect him.”

Craig said Elosiebo “was a terrific student and pilot during her time at MTSU, but I will remember her most for her leadership in the MTSU InFlight program. She inspired so many to go on to college and begin careers in aviation and many other fields. Dina is one of those students that we go into teaching for.”

After graduating in 2002, Elosiebo struggled to find just the right fit for her flying skills. She figured that for her, the military would provide a more stable career than the private sector.

“Civilian pilots often struggle at the very beginning in terms of livable income until they climb the food chain,” said Elosiebo. “Besides, as the oldest in the family, I always had a strong sense of duty.”

Now that she’s flying high, Elosiebo is also paying tribute to the people who helped her realize her dreams by reaching out as they did.

“One of my primary missions in life is to mentor young people. If flying is your mission, almost anyone can do it.”