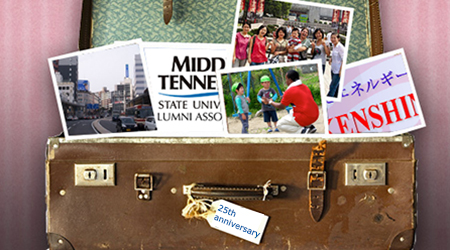 MTSU alumni and their families will travel to Japan this month to celebrate the 25th anniversary of an internship program that enriched their lives.

The Fukushima-Prefecture Commercial and Industrial Credit Cooperative, or KENSHIN Bank, will host the weeklong reunion in Koriyama, Japan, starting Wednesday, May 29.

KENSHIN’s internship program with MTSU began in 1988 with invited students taking turns working for the bank for one year.

It was the brainchild of Dr. Kiyoshi Kawahito, economics professor emeritus, who says it all began with his friendship with bank managing director Yoshio Susa.

“He came to Nashville in 1979 as a young heir apparent of the financial institution in Japan and did an internship at the First American Bank while studying English at the International English Institute,” said Kawahito.

He also noted that Sosa became the first international member of the MTSU Foundation Board of Trustees in 2001.

The Susa family lived in Nashville for several years. In the mid-1980s, after he had returned to Japan, Susa expressed a desire to reciprocate the hospitality he and his family had received in Middle Tennessee. Kawahito and Susa worked for two years on the details, and the result was the KENSHIN internship.

Jim Chapman, the third intern selected, was a part-time graduate student majoring in economics and working at then-MidSouth Bank when he was chosen. He worked at KENSHIN from August 1989 to August 1990.

“What I learned was that I broadened my perspective on life and the world,” Chapman said.

“Japanese employees visit clients and pick up deposits at their houses,” Chapman recalled.

At the conclusion of the internship, Chapman found another job in Tokyo and stayed there for another five years.

“Most of them developed into successful professionals upon their return to the U.S., including lawyers, financial analysts and researchers,” Kawahito said of the interns.

In addition to Chapman, who works in the licensing department of Broadcast Music Inc., at least four other former interns are slated to make the trip — Robert Callahan, Leigh Butler, David Shipley and Elizabeth Blankenship, all of whom work and live in the Nashville area.

The seven-day program will include receptions, a party aboard a Tokyo Bay cruise ship, visits to KENSHIN branch offices and attendance at a conference, “Japan and the United States: Yesterday, Today and Tomorrow.”

The alumni also will make trips to various areas in Fukushima, including the region victimized by the 2011 Tohuku earthquake and tsunami disasters, and they will make donations to disaster relief.

Several dignitaries are expected to attend the reunion, including the governor of Fukushima, the mayor and the president of Fukushima University.